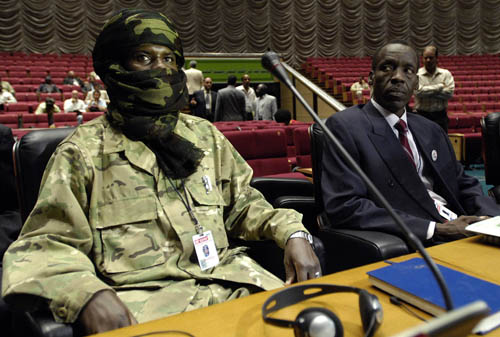 Sudan's government declared an immediate unilateral cease-fire at the opening of Darfur peace talks on Saturday, but the absence of key rebels cast doubt on whether the move could produce meaningful progress.
One rebel leader who did attend the gathering in the Libyan town of Sirte voiced reservations about Khartoum's move, saying the government had failed to honor past such undertakings during 4-1/2 years of violence in the western region.
"We announce a cease-fire from this moment, and we will respect it unilaterally," Sudanese presidential adviser Nafie Ali Nafie told the gathering aimed at ending 4-1/2 years of violence in the western region.
Rebel leader Ahmed Ibrahim Diraige of the Sudan Federal Democratic Alliance told Reuters: "The government has already said several times since 2004 that they observed a cease-fire. They again spoke like this today. We have our doubts."
On the eve of the African Union-United Nations-mediated talks, two main rebel groups - the Justice and Equality Movement and the Sudan Liberation Army Unity faction - said they would not attend.
That decision emerged after another rebel chief, Abdel Wahed Mohamed el-Nur, founder of a third group, the Sudan Liberation Army, said he would not attend the talks. JEM-SLA Unity represent the biggest military threat to the Sudanese government and Nur has the most popular support among Darfuris.
In a message from New York, U.N. Secretary General Ban ki-Moon called on those rebels who were absent to attend, saying they stood to lose much if they continued to stay away.
"As a demonstration of your genuine commitment to ending the suffering of the people of Darfur and to finding a lasting peace, I urge all parties to commit to an immediate cessation of hostilities here and now," he said.
African Union envoy Salim Ahmed Salim told the gathering: "Enough is enough. Let us not forget that what happened in Darfur will sooner or later impact the rest of Sudan, the rest of the region and the rest of Africa. Sudan is a microcosm of Africa."
The talks are the first attempt to gather Darfur rebels and the government around a negotiating table since 2006 when the AU mediated Darfur peace talks in Abuja, Nigeria.
Signed by only one rebel faction, the resulting deal had little support among the 2 million Darfuris trapped in displacement camps.
Rather than bring peace, it triggered fresh violence, as rebels split into more than a dozen factions, some preying on civilians, aid workers and AU troops sent to the region to quell the violence but unable to protect themselves.
International experts say 200,000 people have died since rebels rose up against the government in 2003, charging it with neglect. The Sudanese government says the Western media exaggerates the crisis and only 9,000 people have died.
Analysts have warned that without full rebel representation the Libya talks would go the way of the Abuja deal.
Rebel leaders in Libya said those who stayed away were the founders of groups that had split and were now angry at seeing their former deputies taking part in the talks as their equals.
Talks host Libyan leader Muammar Gaddafi said the conflict in Darfur was a war between tribes and there were limits to the usefulness of foreigners. "Intervention by outsiders will only fan the flames of conflict," he said.
Khartoum agreed in July to allow a hybrid force of 26,000 U.N.-AU troops to deploy in Sudan to replace and absorb some 7,000 AU peacekeepers in western Sudan.
That deployment is expected to begin by year-end but, without a deal, some nations might be loath to commit troops.