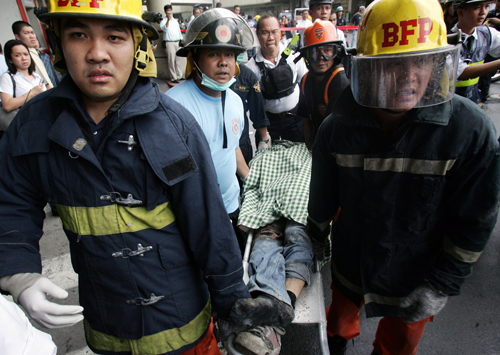 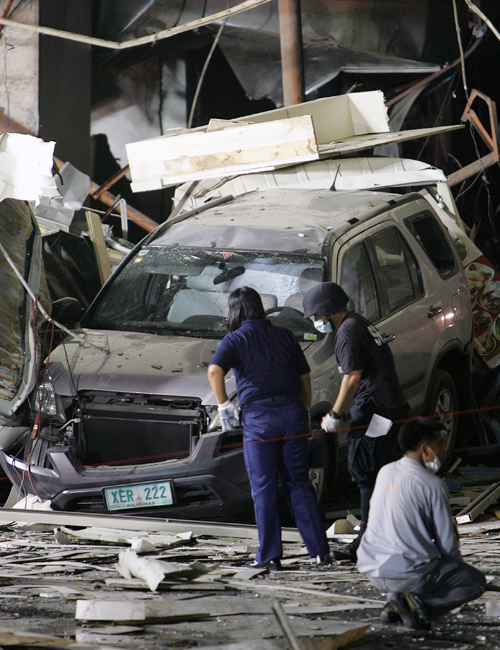 Military explosives were used in a huge bomb blast at a Manila shopping mall that left nine dead and 113 injured, Philippine police said yesterday.
Evidence collected from Friday's Glorietta mall blast indicates that the bomb "contained RDX, the main chemical component of C4," the police said in a report to Philippines President Gloria Arroyo.
In the Philippines C4 explosive is only used by the military.
The report was delivered at a top-level security meeting between the president and her security advisers at police headquarters in Manila.
Arroyo immediately ordered the country's police chief General Avelino Razon to check its source and pin-point the culprits.
"Is that already definitive... or is there going to be another more detailed finding of what kind of explosive was used?" Arroyo said during the briefing. "We need regular information bulletins on the status of the investigation."
Senior Superintendent Bert Ferro, who heads the police bomb data center, said samples taken from the site leads him to "presume that those are of military ordnance components."
A chemist from the center told Arroyo that it was possible that more samples were being collected from the site, but "at this point in time, that is what we have."
Razon said the government was putting up a two-million-peso (US$45,454) reward for any information leading to arrests.
Panic
Panicked shoppers ran out of the Glorietta mall in the Makati district of Manila as smoke billowed out of the building shortly after noon.
Manila police chief Geary Barias said the blast killed eight people, all Filipinos, and wounded at least 99 others, including two South Koreans and a Chinese citizen. Twenty-one of the wounded have been sent home from hospital.
Bomb debris carpeted a 200-square-meter area, Barias said.
Police experts declared the building free of any more explosives early evening, allowing them to shift their work to investigating the blast, he told reporters.
Makati City councillor JunJun Binay said the explosion left an eight-meter wide crater on the ground floor and blew a hole through the roof on the second floor.
"From what I have seen it was a significant explosion and that most of the dead and injured were all employees," he said.
Witnesses said part of a ceiling collapsed while a concrete wall was blown out.
Two cars and two delivery vans were buried under wooden planks and concrete debris outside the mall.
"It was so powerful," clothing store clerk Jeric Balendes told AFP as rescuers treated his cuts and bruises.
"The roof just collapsed on us. I could hear my three co-workers screaming. I got out through a small hole. I don't know if they got out."
Police stepped up security across Manila, a sprawling city of 12 million people.
"I am deeply saddened by this unfortunate incident and I extend my sincerest sympathies to the families of those were killed and wounded," President Gloria Arroyo said in a statement on national television.
High alert
The military and police are "on highest alert and are fielding an additional 2,000 personnel to secure our public places and to prevent a possible similar occurrence," she said.
"I warn those who seek to exploit this incident to destabilize our government for their selfish political motives," she added.
No group has claimed responsibility for the blast, which came weeks after military intelligence foiled an alleged plot by al-Qaida-linked Abu Sayyaf Islamic militants to bomb the southern port city of Zamboanga.
National Security Adviser Norberto Gonzales said authorities were also looking at the Abu Sayyaf as possible suspects, noting that the group may have carried it out as part of their campaign to attract funding from international terrorist groups.
The 12,000-strong Moro Islamic Liberation Front said yesterday it is "prepared to gather intelligence for the Philippine authorities if asked to do so," spokesman Eid Kabalu told AFP.
"We would like to help out if asked. This could help the military at least eliminate some groups from their list of suspects," he said, adding that the offer was being made as a "sincere gesture" that could also help revive stalled peace talks.
Reports said officials from the U.S. Federal Bureau of Investigation were helping Philippine police in the probe.
Throughout the night bomb experts sifted through blast debris trying to find clues as to what sort of bomb was used.
The mall remained sealed yesterday, with a cordon of policemen guarding its perimeter.
Razon said the bomb was apparently left at a delivery bay near a popular Chinese restaurant at the mall shortly after lunch.
He said investigators were also reviewing closed circuit television cameras and interviewing survivors and witnesses.
Tighter patrols
Security in all malls, bus and train stations, as well as sea and airports have been intensified, Razon said, with elite police commandos patrolling streets.
Alfie Reyes, a spokesman for the mall owners Ayala Land, said the firm would pay all medical expenses for the victims.
Officials and witnesses said the explosion left an eight-meter-wide crater on the ground floor and blew a hole through the roof on the second floor.