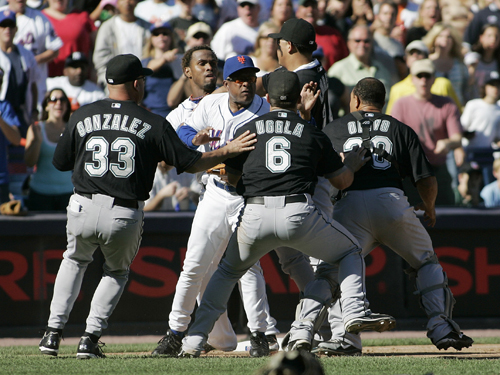 The Shea faithful may have arrived expecting to witness history: the completion of the collapse of a Mets team that hadn't been out of first place in 137 days.
Instead, they witnessed what nearly became the first no-hitter in Mets history. And a pair of bench-clearing incidents. And, most significantly, the assurance that meaningful games would be played in the NL East on Sunday.
The Mets, it turns out, do have some fight - and life - left in them. The Phillies lost to the Nationals, meaning the Mets control their own fate in the NL East. They also remained alive for the NL wild card, one game behind the Padres.
"We're still breathing," manager illie Randolph said.
John Maine came within four outs of the first no-hitter in the Mets' 7,145-game existence, Jose Reyes transformed himself from loafer to love object when the Marlins allegedly incited an on-field scrum, and Lastings Milledge slugged two homers as the Mets routed Florida, 13-0, on Saturday to snap a five-game skid and eight-game home losing streak.
Pitching what could be labeled the second elimination game of his Mets career - the other his 5 1/3 scoreless innings in Game 6 of last year's NLCS - Maine couldn't have been better. He lost his bid for immortality when Paul Hoover, who had replaced ejected Miguel Olivo at catcher, trickled a ball up the third-base line that David Wright could only pocket.
"That was one of the best sliders he threw all day," Wright said.
Maine (15-10) had a career-high 14 strikeouts, including a string of seven straight, the longest run of punchouts by a Met since Al Leiter against Arizona in 1998. Maine had been 4-6 with a 6.11 ERA since the All-Star break. He notched his first victory in September while matching Oliver Perez for the team lead with his 15th win. Randolph came to the mound to remove Maine after Hoover's infield single on pitch No. 115, and the low-key Maine made only a slight gesture with his right hand to acknowledge a standing ovation as he disappeared into the dugout.
"The timing was pretty good," Maine said about his combined one-hitter with rookies Willie Collazo and Carlos Muniz. "We needed a win today."
The Mets pulled back into a tie fort the division lead after Philadelphia lost to the Nationals 4-2, unable to solve Washington starter Matt Chico.
If Philadelphia and the Mets are still tied after Sunday, there will be a one-game playoff Monday at Citizens Bank Park to determine the East winner. Both clubs would be eliminated from wild-card contention if San Diego wins its final game against Milwaukee.
The Padres are assured of at least a tie for the NL wild-card spot, and they can wrap it up with a win Sunday. Their 4-3 loss to the Brewers on Saturday clinched the NL West for Arizona and gave the Diamondbacks home-field advantage throughout the NL playoffs.
In beating the Diamondbacks 11-1, the Colorado Rockies stayed in the hunt for a postseason spot but they would need to win their final game and have San Diego lose to get into a tiebreaker game.
Wang to open for Yankees
In a move that should have surprised nobody, the New York Yankees announced yesterday that Taiwan's Wang Chien-ming will start the team's opener in its best-of-five division series against the Cleveland Indians Friday morning Taiwan time.
Wang led the staff with 19 wins and has a sinkerball that manager Joe Torre hopes will neutralize Cleveland's hot bats. The Tainan native did not face the Indians in 2007. Were the series to go to five games, Wang could be called on to start the finale the morning of October 11.