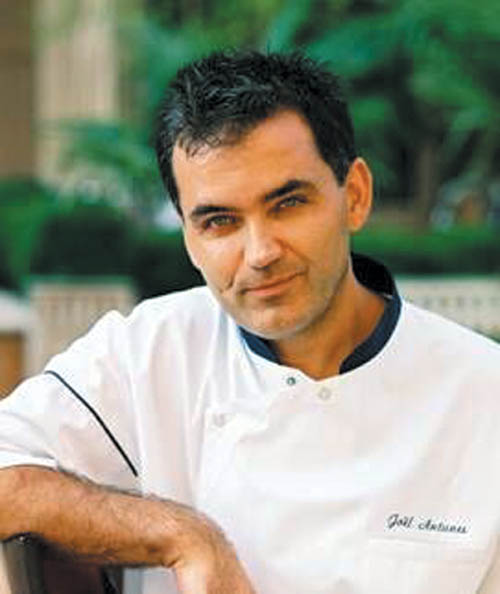 Renowned chef Joel Antunes from Atlanta will serve as guest chef at Paris 1930 of Landis Taipei from September 18 to October 28 and at Hotel ONE Taichung from October 24 to October 31.
He will present his signature dishes during his stay in Taipei and Taichung.
Dinner set menu is at NT$4,200+10% and lunch at NT$1,800+10%.
Born in 1961 in Volvic, France, Antunes officially began his culinary training in 1975. Since then, Chef Antunes has been a chef at prestigious restaurants such as Ledoyen and Duquesnoy in Paris, the Hotel Negresco in Nice, worked under celebrated French pastry chef Yves Thuries and served as Chef Poissonier for the legendary Paul Bocuse in Lyons.
Continuing his climb up the culinary ladder, he became Sous Chef at Troisgros in Roanne, France before relocating to Bangkok, Thailand to serve as Chef Cuisinier at the Oriental Hotel's Normandie Restaurant. After another short stint in France at Marc Meneau's Michelin three-star restaurant, Chef Antunes became chef-partner at the critically acclaimed London establishment Les Saveurs, where his culinary prowess earned the restaurant a Michelin star in 1994 and recognition as "restaurant of the year" from British magazine Decanter.
When the Ritz-Carlton, Buckhead began its search for a new chef for their restaurant, The Dining Room, in 1997, famed Chefs Daniel Boulud and Alain Ducasse whole-heartedly recommended Chef Antunes for the job. He served as chef for four years, earning the restaurant both a Mobil five-star award as well as an AAA five-diamond award and making it to the only restaurant in the Southeast to simultaneously hold both accolades. The culmination of Chef Antunes' more than 25 years of culinary experience occurred when he opened his own restaurant, JOEL, in Atlanta.
After several years of extreme success at JOEL, in an effort to more intimately connect with his diners, Antunes has refocused his menu, making it more approachable so that Atlantans can enjoy his cuisine on a nightly basis, rather than just for special occasions.
To make this possible, Antunes offers many fresh, simple, affordable dishes. Every option on his menu maintains the highest of standards and reflects Chef Antunes' passion and extensive culinary experience in Paris, the south of France, Asia, London and as executive chef at the Dining Room at the Ritz-Carlton, Buckhead.
National accolades for the restaurant include being named one of the "Best New Restaurants" by Esquire Magazine and one of "America's Best Restaurants" by Gourmet Magazine. Regional awards include being named one of Atlanta Magazine's top 100 restaurants. Chef Antunes, after being nominated in 2003 and 2004, won the James Beard Foundation Award for "Best Chef in the Southeast" in 2005.
For further information or reservation, call Landis Taipei at (02)2597-1234, ext. Paris 1930; or Hotel ONE Taichung at (04)2303-1234, ext. Revolving Lounge.