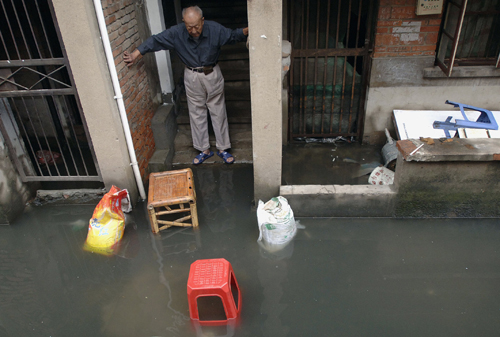 Typhoon Wipha, which fizzled into a tropical storm while sweeping across eastern China, killed nine people and left three missing when it lashed the region with winds, torrential rains and landslides, reports said yesterday.
Direct damage from the storm was estimated at 6.62 billion yuan (US$880 million), the official Xinhua News Agency reported, citing the Ministry of Civil Affairs.
Five people died in landslides unleashed by the storm in Zhejiang province, which neighbors Shanghai, and another two were electrocuted while trying to weather-proof their homes in Jiangsu province, to the north of Zhejiang, Xinhua and other state media reports said yesterday.
Earlier reports said a Shanghai man was electrocuted when he stepped into water electrified by a light box and a construction worker was killed when the storm knocked over scaffolding in Taiwan.
Weather photos showed Wipha spread over a large area centered on eastern China's Shandong province yesterday. The storm was forecast to pass over the Yellow Sea toward the Korean peninsula.
Wipha was downgraded from a typhoon to a tropical storm Wednesday after it hit land in southern Zhejiang province, south of Shanghai, Xinhua reported.
Another three people were missing, it said, without giving any further details.
A total of 2.7 million people were evacuated from coastal or flooded areas and unsafe housing in Shanghai and other areas affected by the storm, Xinhua said.
The storm destroyed thousands of houses, wrecked fish ponds and disrupted power to more than 100 communities, the Ministry of Civil Affairs and provincial officials reported.
Shanghai, a city of 20 million, closed schools, ferries and other transport links following forecasts of torrential rains and strong winds. But the city suffered little damage and by yesterday children returned to school under clear skies.