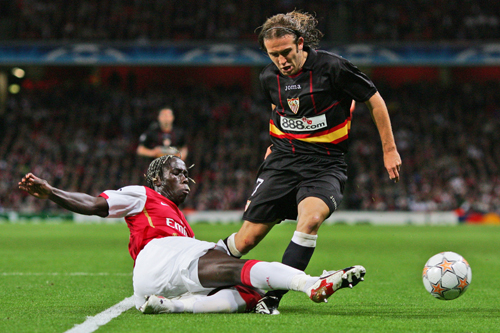 Arsene Wenger declared his Arsenal team better equipped to win the Champions League than at any time in the last two years following a "near perfect" start to the group stage.
Wenger praised his team's attitude after a stylish 3-0 win over highly rated Spanish outfit Sevilla at Emirates Stadium on Wednesday which sent them to the top of Group H.
The former Monaco coach hinted that the departure of star player Thierry Henry to Barcelona in the summer may have helped his team. He said: "I want to reiterate, I did not want Henry to leave, he decided."
"We lost a world class player but it gives the other players a challenge and pushes some of the players to take more responsibility," he added.
The Frenchman implored his young squad not to get carried away, but the rest of Europe will have taken note after the demolition of a team that Wenger himself had tipped as a potential dark horse.
He said: "We have improved from two years ago without a doubt, we look a lot more mature technically. There's a real spirit in the team and it's fantastic."
Wenger insisted that his players were under no pressure to win the tournament, saying: "The main challenge of this season is to show how far we have come."
The renewed spirit and maturity of the Gunners was epitomized by Spanish youngster Francesc Fabregas, who has now claimed six goals during his scintillating start to the domestic and European season.
His manager said: "Last year he couldn't score but I told him not to worry and now he cannot stop. He looks a lot stronger physically than he did last year."
The only blots on the Gunners' night were a hamstring injury sustained by Tomas Rosicky, which will keep him out of action for at least two weeks, and a booking for striker Emmanuel Adebayor.
The Arsenal boss knows full well the importance of keeping a fit squad with few suspensions.
He said: "There are two competitions, there is the group and then the knock-out. For this you definitely need all of your best players available."
The diminutive Fabregas claimed Arsenal's first goal, albeit via a fortuitous deflection.
The Spaniard then turned provider for the second goal, whipping in a free-kick which Robin van Persie converted. Eduardo scored the third goal seconds before full-time as Sevilla over committed men to attack.
Visiting coach Juande Ramos bemoaned his team's lack of experience. The Arsenal match was the club's first in the Champions League proper.
He said: "The players we face this year are a lot stronger than we are used to in the UEFA Cup. At this level if you give the opposition a chance they will take it."
The former Malaga coach laughed off pre-match suggestions by Wenger that his team could win the whole competition.
He said: "I don't think so! I know our level and I know what we will have to do to win games in this group."
"There are a lot of clubs like AC Milan and Arsenal who are ahead of us, financially. We will have to play very well to go through from this group," he added.
The Spanish boss failed to be downbeat though, adding: "The great thing is that a team like Sevilla can come here and have a go at a team like Arsenal."