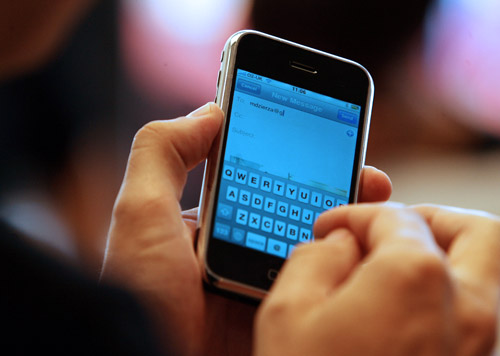 Apple announced here yesterday that Britain would be the first European country to get its much-vaunted iPhone, when mobile phone operator O2 launches the gadget on November 9.
Apple chief Steve Jobs told a London press conference that O2, owned by Spain's Telefonica, has won an exclusive contract to distribute the iPhone in Britain for "cultural," rather than economic, reasons.
He said the iPhone would retail in Britain at 269 pounds (US$536).
"We talked with the main operators here but we think we have chosen the best and the most popular one," Jobs told reporters gathered at the Apple Store in Regent Street, one of central London's most plush shopping areas.
"It wasn't an economic choice, but a cultural choice, we think they're doing a great job."
The iPhone was rolled out in the United States in late June ahead of its hotly-anticipated European launch.
Jobs on Tuesday declined to say when the trendy eight-gigabyte iPhone would be introduced elsewhere in Europe.
"We said we planned to be in other places in Europe in Q4 (the fourth quarter of 2007) and we still plan to be," Jobs said, adding:
"Today it's about (the) UK, that's all we have to say today."
O2 chief executive Matthew Key said the iPhone would only work on his company's telephone network.
The gadget would be available for purchase at British mobile phone retailer Carphone Warehouse, as well as Apple's own chain of shops, he added.
"The minute I used it, I knew it was a breakthrough product," Key told reporters.
"We're about bringing great customer experiences," he added.
Apple has won strong reviews for the touch-screen iPhone handset, which combines Internet, telephone and iPod-like music and video play.
The iPhone's British price tag compared with the current price of US$399 in the United States.
"We try to be as aggressive as we can," Jobs said in reference to the UK retail price of 269 pounds.
"Price difference with the U.S. is mostly VAT (value added tax), and a little part of it the due to the cost of doing business being higher here," he added.