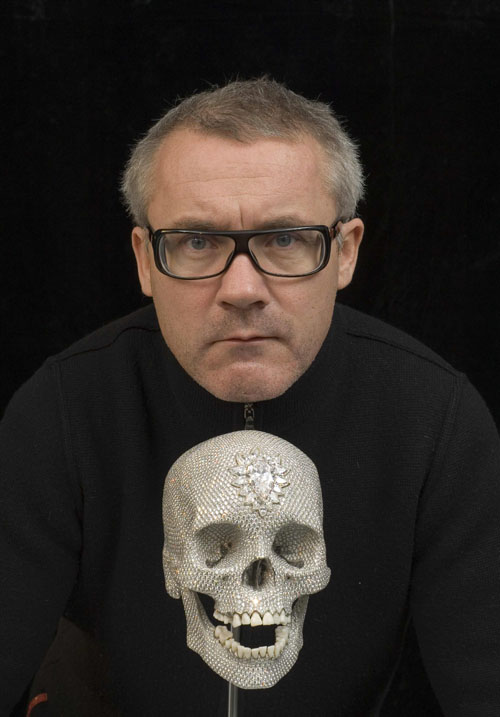 Damien Hirst, the U.K.'s wealthiest artist, is part of the investment group that is buying his diamond skull for US$100 million and plans to resell it later, said London's White Cube gallery.
"Hirst is keeping a stake in the skull," said White Cube spokeswoman Sara Macdonald. "It is the intention of the investment group to resell the sculpture at some stage in the future but I cannot provide a time scale for this or estimate the value that the work will be sold for," she said in an e-mail yesterday.
The platinum skull, studded with 8,601 diamonds, was on the market at least since June 3, when it went on show with other Hirst works at Jay Jopling's White Cube. A sale is being completed at the US$100 million asking price, with three to four weeks of paperwork left, Frank Dunphy, Hirst's business manager, said on August 29, declining to identify the investors.
The plan to resell the skull indicates Hirst hasn't yet found a final buyer for his most expensive artwork, at a time when hedge fund managers and other art collectors have lost money in the credit markets.
The artist's participation in the temporary buying group may provide a clue to how the full US$100 million sale price was achieved. The skull cost US$20 million to make, including diamonds and fabrication, according to Dunphy.
Staying popular
"The sale keeps Hirst in the news, reinforces the demand for his work and makes everyone who spent money at White Cube feel good about their investment," said California private dealer Richard Polsky. "This is all about investment, not about art collecting."
The buying group will be required to send the skull on tour to museums and galleries around the world, White Cube has said. Dunphy yesterday referred questions on Hirst's role in the group to White Cube.
Hirst was "retaining a participation to oversee the global tour," spokeswoman Macdonald said. Asked if White Cube also had taken a financial stake in the skull, she said, "Not that I'm aware of."
White Cube said it sold 130 million pounds (US$262 million) of other Hirst works at the June show. His auction record of 9.7 million pounds - the highest for a living artist at auction - was set in June at Sotheby's, when a telephone bidder bought a pill cabinet, "Lullaby Spring."
Hirst, 42, has a fortune valued earlier this year at 130 million pounds by the London-based Sunday Times. Hirst also is represented in London and New York by Larry Gagosian's Gagosian galleries.
The White Cube shows drew collectors from Eli Broad to five museums who purchased Hirst's works, including at least two from the U.S., according to the gallery.