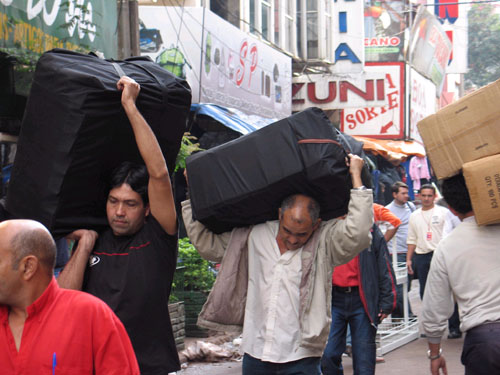 The daily free-for-all begins in the early morning in this bustling border town as hundreds of people fill the dingy streets snatching up cheap electronics, perfume and other goods from the countless shopping malls.
The "little ants," as the buyers are known, then head for the banks of the Parana River, where they try to cross to Brazil illegally by foot, boat, even by plane. If they make it, the merchandise is sold for up to double the price in Brazilian cities often thousands of miles away, where taxes are among the highest in the world.
The no-holds-barred commerce has long earned this 240,000-person city worldwide notoriety as a haven for smugglers, money launderers and, U.S. officials say, funders of terrorists.
The contraband, Brazilian officials say, doesn't stop at DVD players and Johnnie Walker whiskey. It includes machine guns for Rio de Janeiro's drug gangs, Bolivian cocaine headed for Europe and untraced money that travels from the city's shops all around the world.
Now, Brazil is trying to control the free-trade zone better, angering thousands of people who've built their livelihoods around the chaos.
A real clampdown would block the fount of uncontrolled money - estimated in the hundreds of millions of dollars every year - that, after the September 11, 2001, terrorist attacks, has drawn unwanted international attention to what's known as the triple border region, shared by Brazil, Paraguay and Argentina, said Francisco Labriola, the director of Brazil's customs administration.
Last December, the U.S. Treasury Department named nine people of Arab descent and two businesses in Ciudad del Este and the neighboring Brazilian city of Foz do Iguacu as supporters of and fundraisers for the militant Islamist group Hezbollah, which is on the U.S. list of terrorist groups.
The Arab merchants had hosted fundraisers for Hezbollah, transported money to the group in Lebanon and provided intelligence to it about the triple border, the Treasury Department charged.
"It's going to be much harder to bring in illegal cargo and money," Labriola said. "The problem has never been addressed before, and we're going to stop this."
Tighter security
Since 2004, Brazil has beefed up customs facilities at its end of the Friendship Bridge connecting Ciudad del Este and Foz do Iguacu, creating long lines of buyers hoping to get into the country. Enforcement also has toughened along the Parana River and nearby Itaipu Lake, where boats filled with contraband often are caught crossing at night.
The reaction from merchants, buyers and laborers on both sides of the border has been quick and furious, with rowdy protests paralyzing the bridge for days at a time.
"We're just trying to make a living here," said Marcelo Vargas, who duct-tapes countless boxes every day for the cross-river journey. "I went out there on the bridge to support my comrades because we're all hurting with these new rules."
Since the city's creation in the 1950s, a chaotic system of commerce has sprouted here, moving about US$2.5 billion a year in goods ranging from Sony PlayStation game consoles to assault rifles.
The suppliers
It starts with hundreds of merchants, including immigrants from Lebanon, Taiwan and Korea, who sell in bulk to the so-called little ants. The boxes of merchandise are wrapped in plastic and duct tape and, if they make it across the river, handed off to other shippers, who deliver them to major Brazilian retail stores and others.
Bribes have long made sure that little record is kept about the amount of merchandise sold, where it goes and what happens to the money.
The new controls have thrown a wrench in the system, local merchant Armando Nasser said. Business leaders estimate that merchant revenue has dropped by 60 percent over the past five years.
"We're already at another stage here," Nasser said. "I didn't believe this would ever happen."
Brazilian and Paraguayan officials acknowledge that the problem won't go away anytime soon. Already, smugglers have moved to other parts of the 750-mile border between the countries to avoid the strengthened enforcement at Ciudad del Este.
Smuggling pays, because protectionist Brazil charges some of the highest taxes in the world - as much as 80 percent for some goods - and Paraguay among the lowest, at about 4 percent.
Last year, Paraguay imported US$4.5 billion worth of goods and exported US$1.7 billion, which should have sent the 6.7 million-person country's currency into freefall. That didn't happen, leading many economists to suspect that the bulk of those imports were re-exported illegally.
Responding to the street protests, Brazilian legislators are looking at lowering tariffs for people who import a limited amount of goods from Paraguay, in the hope of turning them into legitimate businesspeople.
Brazil also will require merchants to issue electronic receipts that can be checked by customs agents and buyers.
The hope in Ciudad del Este is that removing the region's taint of illegality ultimately will mean good business, said Jefferey Hesler, the head of the city's Paraguayan American Chamber of Commerce. The question, however, is whether Ciudad del Este will survive the transformation.
"Part of this new plan is to make everything clear so there won't be all these questions about where money is going," Hesler said. "The people who can't adapt will just have to go to other places."