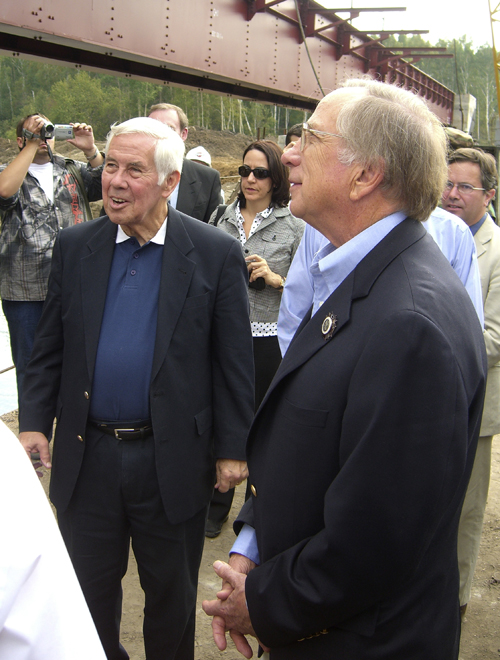 Here in the wheat fields of western Siberia, the United States and its partners are building a factory the size of a small town designed to destroy 2 million Soviet-era artillery shells filled with deadly nerve gas.
Former U.S. Senator Sam Nunn praised the project as "this noble effort" during a visit to the Shchuchye plant Thursday. But so far it hasn't been easy.
After more than a year of delays caused by a fruitless hunt for a Russian subcontractor to install key equipment at reasonable cost, U.S. officials say a few months ago they turned to Viktor Kholstov, deputy director of the Federal Industry Agency, who runs Russia's chemical disarmament efforts.
The United States gave Kholstov's office the job of awarding up to US$200 million in contracts to complete the project - part of the US$1 billion overall the U.S. is contributing. U.S. officials said he swiftly found subcontractors willing to do much of the remaining work at fair prices.
Those awards may have marked a turning point for Shchuchye, the single most expensive effort in the U.S. Nunn-Lugar Cooperative Threat Reduction program - named after Nunn and U.S. Senator Richard Lugar, who also visited Shchuchye Thursday.
Deactivation of nukes
Congress adopted the Nunn-Lugar program in 1992 shortly after the Soviet collapse, to keep Russia's vast stockpile of nuclear, biological and chemical weapons from falling into the hands of rogue states and terrorists.
Under the program, former Soviet nations have deactivated 6,982 nuclear warheads, destroyed 653 intercontinental ballistic missiles and chopped up 30 nuclear submarines.
Russia is working with 13 other nations to build the Shchuchye facility. But the U.S. has agreed to pick up the vast majority of the costs.
The chemical weapons destruction facility at Shchuchye, now a little more than half completed, was intended to destroy what one U.S. official Thursday called "the most pilferable" nerve gas weapons in Russia's enormous stockpile of chemical weapons.
Nunn called the nerve-agent filled shells, one of which could fit in a briefcase, "a terrorist's dream."
Problems with construction at the site last year led a U.S. General Accounting Office analyst to conclude that "Shchuchye may no longer be a priority for the Russian government."
"Disagreements between the United States and Russia over the types of munitions to destroy and how to destroy them, negotiations to resolve outstanding issues, restrictions on U.S. funding, and difficulties with Russian subcontractors, among other factors, have delayed the Shchuchye facility's completion and increased its costs," Joseph A. Christoff of the GAO wrote in a May 2006 statement to Congress.
After a major contractor declared bankruptcy in 2005, project managers sought bids to complete the vital work of installing the automated equipment in the site's two huge shell-destruction buildings.
In one round, the only contractor with a bid that met requirements was US$239 million over the U.S. Defense Department's budget. Other efforts failed to attract acceptable bids, the GAO said.
Growing costs
But James Reid, director of the U.S. Defense Department's Cooperative Threat reduction policy office, said Thursday that most of the delay came as officials tried to meet stipulations Congress placed on the project - requiring, for example, that the agency clear up discrepancies in Russian statements about the size of its chemical arsenal.
Those stipulations were eventually waived by the White House, Reid said, to allow the project to go forward.
The cost of the project rose, he said, mostly because of the ruble's growing value and rising prices here.
Paul McNelly, project manager for the U.S. Defense Department, and other U.S. officials said Thursday that since Kholstov was allowed to sign contracts, the project has rapidly accelerated.
He acknowledged that he had trouble finding a contractor to complete vital work. But he praised the contribution of the Russian government during the construction process, and said turning over the award of contracts to Kholstov had made a big difference.
Russian officials, he said, can be more flexible in awarding contracts because they don't have to follow complex U.S. bidding procedures. They also have better relations with contractors, he said, because the contractors know they will have to do business with the government again.
"We don't pay until the work's completed and it's a fair and reasonable price based on our estimate," he added.
But in the past, the project has been marked by some disputes, U.S. officials acknowledged.
The steel artillery shells are currently stored like wine bottles on wooden racks in an isolated patch of forest. U.S. officials originally wanted to build the destruction facility next to the weapons storage site. But local officials offered parcels far from the sheds, making it necessary to build a US$26 million, 17-kilometer railroad just to ship the shells.
Sergei Serbin, the project's senior Russian official, led Nunn and Lugar on a tour of the cavernous Building 101a, one of two concrete structures where soman, sarin and VX nerve agents from the old shells will be drained, neutralized and turned into a harmless, tar-like substance.
In pristine condition
Although the shells are decades old, McNelly said, the poisons they contain "are in pristine condition."
The Russians say they have already destroyed 28 percent of their chemical arsenal. The United States says it has destroyed over 40 percent.
Both the United States and Russia are required under an international treaty to destroy their remaining stocks of chemical arms by 2012.
The GAO predicted last year Russia would miss the deadline, but the Kremlin has ramped up spending and construction significantly over the past year.
The first shells are expected to be destroyed at Shchuchye in late 2008, U.S. officials said. Destruction of the huge stockpile is expected to take about four years.
"We are in the finishing stretch," Lugar, 75, an Indiana Republican, declared after the tour. "In a few months the Russians will be eliminating chemical weapons which could be a danger to Russia and the world."