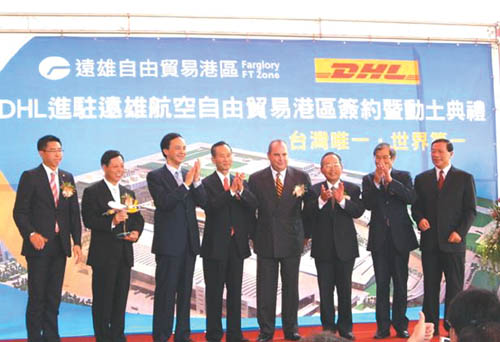 Upbeat about its growth prospects in Taiwan, DHL, one of the world's leading express and logistics companies, announced yesterday that it will be expanding its Gateway at the Taoyuan International Airport. The expansion program will cost the company NT$210 million.
Since 2000, DHL has invested more than NT$1 billion in Taiwan, the highest level in the industry, underscoring DHL's confidence in the Taiwan market, the company said.
With the expansion, the new DHL Gateway will be three and a half times bigger than the previous facility, and will significantly raise DHL's operational efficiency to satisfy the growing needs of its customers, it added. The planned expanded Gateway is scheduled for completion in 2009.
"DHL is committed to continuously invest in Taiwan, and because of rising shipment volumes, we will invest an additional NT$210 million to expand and move the current Gateway housed in the Evergreen Air Cargo Services building to the newly completed Farglory Free Trade Zone," DHL Express Taiwan General Manager Stuart Whiting said at the contract signing and groundbreaking ceremony with the Farglory Free Trade Zone.
"The new enhanced Gateway will be equipped with advanced equipment to handle shipments, more efficiently integrating the logistics equipment and resources across DHL Taiwan's 10 service centers islandwide. The expansion will allow DHL to provide even more efficient import and export services to our Taiwan customers, while guaranteeing shipments arrive at their global destinations in the shortest possible time."
Once completed, the total footprint of the new Gateway will increase to more than 13,500 square meters from the current almost 4,000 square meters. The operational area will increase to nearly 9,500 square meters from 2,250 square meters, raising import and export throughput to 11,000 pieces per hour - up from 6,500 pieces previously, DHL said.
In addition, efficiency gains will also arise from new or additional equipment, such as X-ray machines for large shipments. The number of reloading and unloading docks will double to 10 from five. Telescopic conveyors will also be directly transporting packages from conveyors to delivery trucks, raising the efficiency in which DHL processes shipments, the company added.
In the future, DHL's Gateway at the Taoyuan International Airport will accept drop-off shipments from customers, providing customers with even more flexible and convenient services, Whiting said.
This enhanced service will give Taiwan customers more time to prepare their shipments, and still send packages to their destinations in the shortest possible time, he added.
DHL offers expertise in express, air and ocean freight, overland transport, contract logistic solutions as well as international mail services, combined with worldwide coverage and an in-depth understanding of local markets.
DHL's international network links more than 220 countries and territories worldwide. The company said it has 285,000 employees who are dedicated to providing fast and reliable services that exceed customers' expectations.
DHL is a Deutsche Post World Net brand. The group generated revenues of more than 60 billion euros in 2006.