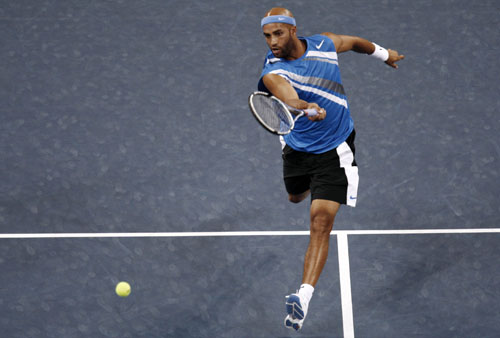 Stylistically, James Blake's match against Fabrice Santoro on Thursday night at the US Open looked like a clash of eras, not just a match between two players with little more in common than the ball they slugged between them for nearly three and a half hours.
It only started with Santoro's shirt, a mesmerizing set of pastel stripes that made him look like an elaborate Easter egg. Santoro, a 34-year-old Frenchman who has cobbled together a long career out of spins and slices and perseverance, spent his changeovers holding an old-fashioned ice bag on his head.
Blake played the contrasting role of All-American athlete, complete with headband and a sleeveless shirt that revealed bulging arms. The 27-year-old Blake has his own brand of grit that holds together a game built on speed and power, but has been tested by injury and bad fortune.
It took nearly 3-1/2 hours and enough wild, highlight-stuffed points to fill an entire DVD collection, but the sixth-seeded Blake, out of Yonkers and Fairfield, moved into third round of the Open. He did it with a 6-4, 3-6, 6-2, 4-6, 6-4 triumph over 34-year-old Fabrice Santoro, the Gallic gnat who would not go away.
He was the oldest man left in the tournament and used every trick he has learned over the years to hang in with the sixth-seeded Blake. He flopped onto the court after long rallies, stalled between points and changeovers, called a fifth-set timeout because of cramps and filled the match with his theatrics.
Blake pounded 83 winners, mostly with his jackhammer forehand, and showed his usual stunning quickness. But he converted just 49 percent of his first serves, had eight double faults and more than tripled (71 to 21) Santoro's unforced error total. He also got plenty tired of seeing Santoro's flicks and nicks, his artful lobs and impossible gets, even as Santoro's body cramped badly over the final two sets.
The shotmaking on display throughout was never more apparent than in the third game of the fifth set, which ended with Blake making a lefthanded forehand and Santoro, having already made a handful of great saves, knocking a lob a little long.
"You have to be ready for anything with Fabrice," said Blake, who has not lost to Santoro in four meetings. "I don't want to see him across the net from me anytime soon."
Said Santoro: "(I wanted) to give him some trouble. I think I did quite good."
Blake seemed poised to close it out in four after he broke back in the sixth game of the fourth, getting to 3-3 by winning a wondrous rally with a topspin lob that the 44th-ranked Santoro carried long with his backhand. Blake pumped his first, and the crowd of 23,733 roared, and made more noise still when Blake drilled a forehand winner to win Game 7 at 30.
But Santoro held for 4-4 - Blake netted a makeable backhand that would have given him two break points - and then broke Blake in Game 9 for 5-4. Santoro served it out with a winner, and the fifth set beckoned, and so did all the questions Blake has had to answer about why he had never prevailed in five sets in nine previous tries.
Santoro had his legs rubbed down on successive changeovers in the fifth, then called for the trainer again when he was serving at 15-15 in the sixth game. A few minutes later, Santoro was a single point from serving for the match three times. Blake belted a glorious backhand volley winner to take care of the first, and used a backhand slice to escape the third. At 30-40 in Game 10, he hit a sharply angled backhand, and Santoro flung his racket at it, but missed, and then the 27-year-old Blake thrust his arms overhead and flung his blue headband into the crowd and drank up the late-night cheers. Working overtime never felt so good.
In other selected results from Thursday's US Open:
Women's singles, 2nd rd
Shahar Peer (Israel x18) beat Bethanie Mattek (USA) 6-1, 6-1; Martina Hingis (Switzerland x16) beat Pauline Parmentier (France) 6-2, 7-5; Nadia Petrova (Russia x7) beat Anastasia Rodionova (Russia) 7-5, 6-1.
Men's singles, 2nd rd
Tomas Berdych (Czech Republic x9) beat Simone Bolelli (Italy) 7-5, 6-3, 6-3; Andy Murray (Great Britain x19) beat Jonas Bjorkman (Sweden) 5-7, 6-3, 6-1, 4-6, 6-1; Andy Roddick (USA x5) beat Jose Acasuso (Argentina) 4-6, 6-1, 6-2, retired; Nikolay Davydenko (Russia x4) beat Nicolas Kiefer (Germany) 6-2, 6-2, 6-2; Tommy Haas (Germany x10) beat Philipp Petzschner (Germany) 4-6, 6-3, 6-2, 7-5.