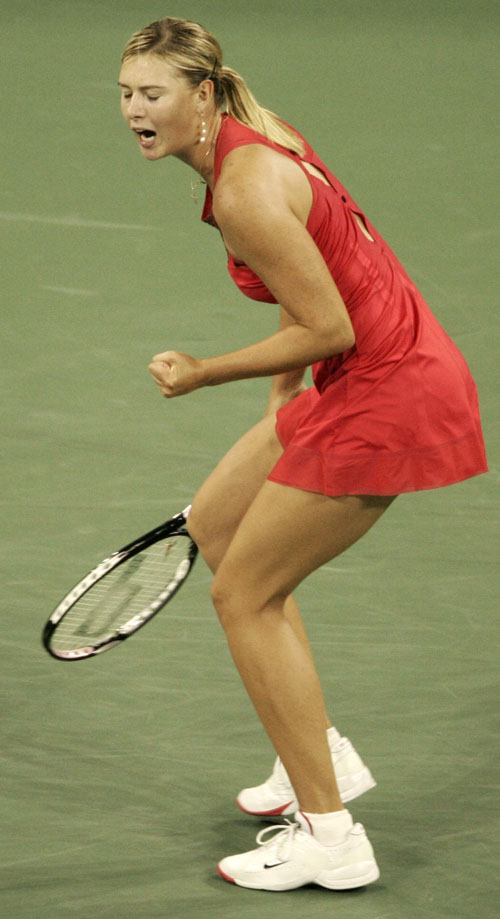 There will be times during this fortnight when Arthur Ashe Stadium will be rocking, when the atmosphere will be electric, and the biggest bowl in tennis will morph into a cauldron of athletic drama.
One of those times was not Thursday night, when defending women's champion Maria Sharapova continued her prance through a toothless US Open bracket, pulverizing her Australian opponent, 22-year-old Casey Dellacqua, with all the subtlety of a wrecking ball.
"I'm trying to play solid from the first point to the end," the second-seeded Sharapova said, after a 6-1, 6-0 victory that moves her into a third-round match against Poland's Agnieszka Radwanska, the 18-year-old 30th seed and a player of considerable promise. "I don't want to give my opponents any chances. Just got to do my job and get off the court."
It surely can't get any easier for the 20-year-old Sharapova, who has lost all of two games in the first two rounds, scarcely breaking a sweat in her fetching, sequined red dress. It was so easy that she refused to take credit for the computer-generated stat that showed her hitting a 129 miles per hour serve - which is Venus Williams territory, but not Sharapova's.
"It was definitely a mistake," Sharapova said. "I've never hit a 129 in my life. Definitely wishful thinking."
How thorough was Sharapova's domination? She had 30 winners, to two for Dellacqua. She had seven break points, and converted six of them. She had troubles with her service toss, and put just 39 percent of her first serves in in the opening set, but it mattered not a whit, because she spanked groundstroke winners whenever she wanted.
Down 4-1 in the first set, Dellacqua had a flicker of hope when she had three break points at 0-40, a prospect that actually brought the crowd out of its slumber. Three errant forehands and two errant backhands later it was over.
One of 10 Russian women to advance to the third round, Sharapova knows that more strenuous matches, and greater dramas, lie ahead. The balky shoulder that has bothered her over the summer is better. It feels good to feel good, she said.