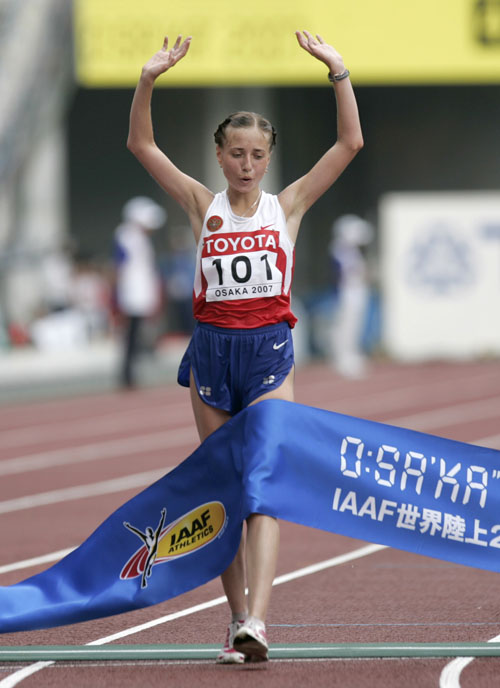 Jeremy Wariner proved again how dominating he can be. Allyson Felix was just awesome.
When Wariner won the 400 meters in a personal best of 43.45 seconds and a margin of .51 over LaShawn Merritt to lead a U.S. sweep, it was almost a given.
For Felix there was still the thrill of the new. With the biggest margin of victory in a major international competition since the 1948 Olympics in the women's 200, Felix surged away from Veronica Campbell to win by a massive .53 margin. Her 21.81 was the fastest time in eight years.
It wasn't all America's day at the championships though. Running in the outside lane 9, Liu Xiang proved why he is the Olympic champion and world record holder and won China's first gold at the championships in the 110m hurdles.
Terrence Trammell, a silver-medal specialist at major events, finished second in 12.99 ahead of U.S. teammate David Payne in third place.
Days after skipping the 100 to concentrate on the 200 meters, Felix had all the power her competitors lacked in the straightaway and win a second successive world championships gold at the distance.
Campbell had to settle for silver after winning gold in the 100, the toil of 8 races in six days started weighing heavily on her after the bend. Susanthika Jayasinghe of Sri Lanka won bronze in 22.63.
Then came the 1-2-3 U.S. finish in the 400. Impassive as ever behind the shiny glasses, Wariner moved mechanically like a cyber runner around the Nagai stadium, steadily building up his lead and closing in further on the 43.18 world record of his mentor Michael Johnson.
At the end of the seventh day, the United States had twice as many titles as any other nation. It led with 8 gold and 19 medals overall. Russia was second with 4 gold and 13 medals.
Not all was well for the U.S. team though.
Bryan Clay's defense of the decathlon world title was over after four of 10 disciplines.
Clay hurt his right leg when he planted his foot for his second attempt in the high jump at 2.00 meters, and slumped under the bar onto the mat. He limped away and did not come back.
After failing to defend his 1,500 title and finishing with silver, Bahrain's Rachid Ramzi could not even make the final of the 800 yesterday. In his semifinal, he faltered badly and finished last of his race. Favorite Yuri Borzakovsky easily won his semifinal to advance to tomorrow's final.
While Clay and Ramzi had trouble in the stadium, for Russia, it was a walk in the park earlier yesterday.
Olga Kaniskina led a 1-2 finish in the women's 20-kilometer through the muggy parkland outside the Nagai stadium, keeping Russia in close contention with the United States in the medal standings.
Behind her, 19-year-old Tatyana Shemyakina got silver.
In the javelin, defending champion Andrus Varnik of Estonia failed to qualify for the final.