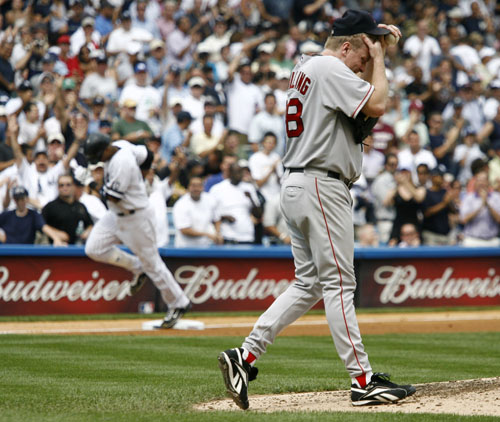 In varied ways, the Yankees have grabbed the Red Sox' attention.
The AL East race lives again - complete with agitated blood and controversy on the field.
"Whether it had been the Red Sox or whoever, these are all big games," Jason Giambi said Thursday, after Robinson Cano's two home runs and Wang Chien-Ming's suffocating seven innings fueled a 5-0 win at Yankee Stadium.
The immediate impact of the Yankees' sweep was a one-game lead in the wild-card race over Seattle, which lost Thursday night, 6-5, to Cleveland. However, the events of Thursday afternoon's ninth inning could resonate through the teams' final regular season series, September 14-16, at Fenway Park.
Seeking his first major league save, Joba Chamberlain threw two fastballs over the head of Kevin Youkilis, the second of which caused his ejection by plate umpire Angel Hernandez.
Boston manager Terry Francona -ejected in the seventh inning when a critical call on the bases was reversed against the Red Sox - said that if Chamberlain's intent was to get Boston's notice, it worked.
In victory, the Yankees (75-59) moved to five games behind first-place Boston (80-54), and stirred up memories of last August's five-game Yankee sweep at Fenway that effectively buried Boston.
It'll take a 1978-type finish to prevent the Red Sox from breaking the Yanks' nine-year streak of division titles, but Joe Torre's club is never more dangerous than when its front three starters are in sync.
Andy Pettitte, Roger Clemens and Wang (16-6) each claimed victory over Boston. After Clemens took a no-hitter into Wednesday night's sixth inning, Wang didn't allow a hit until the seventh.
After Derek Jeter's throwing error started the inning, Mike Lowell grounded a single through the hole where Jason Giambi would've been positioned if he didn't have to hold the runner at first base.
It was Boston's only hit off Wang, who then induced a J.D. Drew grounder to third base that sparked the controversy.
Alex Rodriguez fielded and lunged to tag Youkilis, who slipped away by veering into the infield turf. A-Rod threw to get the out at first base, but Torre charged out of the dugout to argue that Youkilis had run out of the baseline.
After an umpires' summit, Youkilis was declared out, and Wang struck out Jason Varitek to end the inning.
That kept the Yankees' 2-0 lead intact, on Cano's solo homers - nearly to the same spot in left-center field. In establishing a career high with 16 home runs this year, Cano's two shots represented the only damage done off Boston starter Curt Schilling (8-6) in seven innings.
In the eighth, Jeter's fourth single of the day started a three-run inning, featuring an RBI double by Bobby Abreu and a two-run throwing error by Varitek on a double steal by Abreu and A-Rod.
Chamberlain held the 2-0 lead in the eighth, with his 11th straight scoreless inning. The low pitch count, and the sudden 5-0 score, caused Mariano Rivera to stop warming up, and caused Chamberlain to appear in the ninth.