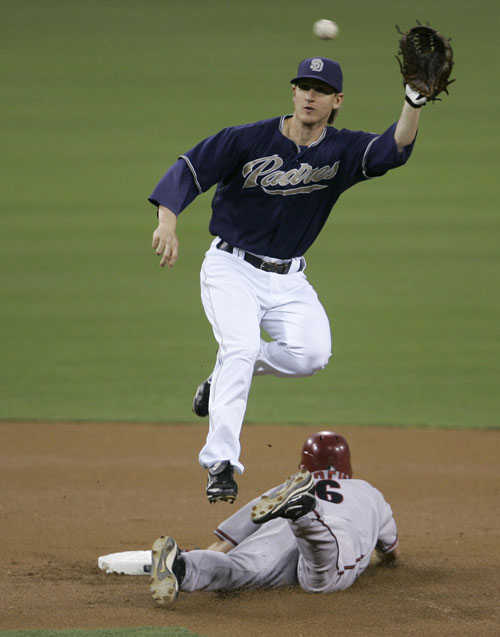 That was not the sky falling here Thursday.
It was Mark Reynolds' 451-foot home run into the upper deck of the left-field bleachers in the second inning.
Or Reynolds' three-run double to the right-field fence in the fifth.
Or the 45-pitch fifth inning the Diamondbacks dropped on three San Diego pitchers while regaining first place in the NL West with an 8-7 victory at Petco Park.
Two hours after manager Bob Melvin held a short meeting to remind the players that things were not as bad as a three-game losing streak here might seem, the D-Backs responded on cue with an 8-0 lead.
"He just asked us 'At the beginning of the year, if we were in this position, would you take it?'" said winning pitcher Doug Davis, paraphrasing Melvin's words.
"Of course we would. It's a good place to be. We're part of it, and that's all you can ask for. That's the bottom line. We just have to battle every day." It got unexpectedly sticky at the end, when San Diego scored three runs in the seventh inning and three more in the eighth to necessitate D-Backs closer Jose Valverde, who gave up a one-out homer to Milton Bradley in the ninth before getting his 41st save.
Buoyed by Reynolds' career-high five RBIs and Davis' career high-tying 12th victory, the D-Backs (75-60) will bring the best record in the NL and a one-game division lead into a three-game series against Colorado today to begin a nine-game homestand. It was their 30th one-run victory, a major league high.
"It is huge," Reynolds said of the victory. "Nobody thought we would be in this position this late, anyway. Bob told us just to relax, keep playing hard and good things will happen." Reynolds' two-run homer with two outs in the second inning gave Davis a 2-0 lead, just the beginning of the D-Backs' best offensive game since a 12-6 victory over the Atlanta Braves on Aug. 18.
"I definitely got my confidence back," said Reynolds.
He had had just three hits in his last 23 at-bats.
"It makes you wonder how the heck did I get in the slump to begin with." After Stephen Drew walked on a 10-pitch at-bat with the bases loaded against left-hander Joe Thatcher to force in the first run in the fifth, Reynolds doubled to drive in the final three in a nine-pitch at-bat off Cla Meredith.
Drew fouled off four two-strike pitches in his at-bat; Reynolds fouled off five.
Davis (12-11) retired the first 10 batters he faced.
He did not give up a run until his 113th and final pitch, when Geoff Blum singled up the middle with two outs in the seventh to make it 8-1.
Davis, who beat the Padres for the second time in as many starts this season, is 7-1 since the All-Star break, opening the second half with an 8-3 victory over San Diego at Chase Field.
The D-Backs have won nine of Davis' 10 second-half starts.
He could make at least five more starts this year.
"It was a nail-biter, but we came through," Davis said.
In other NL action on Thursday: Houston 2, St. Louis 1; Philadelphia 11, NY Mets 10; Chicago Cubs 5, Milwaukee 4; Cincinnati 5, Pittsburgh 4.
In other AL action on Thursday: Detroit 6, Kansas City 1; Tampa Bay 8, Baltimore 6; Cleveland 6, Seattle 5; Texas 5, White Sox 1.