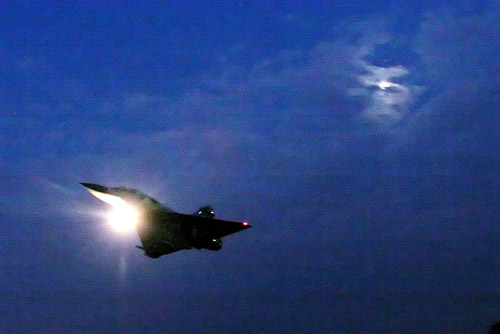 Five fighter planes from the Republic of China Air Force, including Mirage 2000, F-16 and Indigenous Defense Fighter aircraft, landed at Taipei's Songshan Air Force Base yesterday morning for the first time in history in preparation for the public opening of the base Sunday, attracting the attention of media and military aircraft enthusiasts.
The Gangshan Air Force Base in Kaohsiung and Taipei's Songshan Air Force Base will open to the general public tomorrow and Sunday respectively to celebrate the 70th anniversary of Air Force Day. The opening hours will be from 8:30 a.m. to 4:00 p.m.
"By holding these exhibitions we hope that the public can become better informed about our national defense and demonstrate their support for what we do," said the Air Force Command Headquarters.
The highlights of the opening ceremony will be jumps by "The Team Mighty Dragon" paratroopers and the fly-bys by the main air force fighter planes and the "Thunder Tiger Aerobatic Team."
The display will be staged twice each a day, once in the morning and once in the afternoon, said the headquarters.
On the ground, many different types of aircraft and various long- and short-range missiles usually carried on fighter planes will be on exhibition.