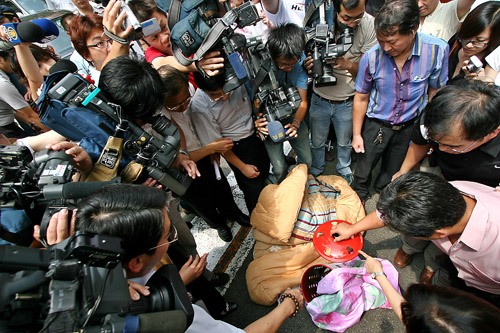 A group of Taiwanese businesspeople protested yesterday over the import of Chinese-made bed sheets they say contain toxic substances.
The protest came amid struggles by 200,000 workers in Taiwan's bed sheet industry struggle to keep their jobs in the face of Chinese competition that undercuts Taiwanese prices by as much as 75 percent.
More than 90 percent of the bed sheets and bed spreads sold in Taiwan come from mainland China, and many contain methanol or fluorescent substances, said lawmaker Lai Hsin-yuan of the government-aligned Taiwan Solidarity Union. Lai led the protest outside the government's Bureau of Standards and Inspection.
"China has a substandard dyeing industry, and the toxic elements found in those bed sheets by far exceed the permitted levels," he said.
Methanol is poisonous and fluorescent materials can contain toxic elements.
The protesters said Chinese-made bed sheets have been smuggled in large quantities to the island, although Taiwan only permits the import of sheets without decorative patterns.
"Taiwanese consumers are generally uncomfortable with China-made goods, but many don't realize the bed sheets they buy in fact came from China," Lai said. "Importers have put 'Made in Taiwan' labels on the goods to cheat consumers."
Two weeks ago, the Bureau of Standards and Inspection banned two Chinese brands of bed sheets that were found to contain toxic elements. But the protesters said the goods are still being sold in many chain stores.
An official from the Ministry of Economic Affairs Wang Cheng-hui promised to enforce the existing ban and said the MOEA would tighten inspections of other Chinese products, including toys, underwear and children's clothes.
Chinese-made products have come under intense scrutiny around the world in the past six months after high levels of toxins were found in a variety of exports, ranging from toys to juice.