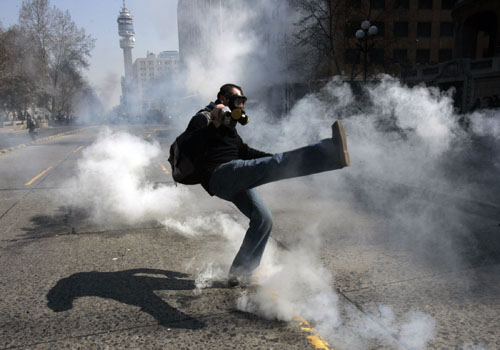 Thousands of Chileans demanding more state benefits clashed with police who used tear gas and water cannons Wednesday to quell the giant street protest, injuring 50 people.
Tensions escalated when the march reached the presidential palace, where demonstrations are banned, as baton-wielding police beat back the crowd and used other deterrents, leaving dozens of demonstrators bloodied and dazed.
"Ahead, ahead with national unemployment," chanted the marching protesters, urging the creation of better state benefits and complaining about the divisive economic policies of Chilean President Michelle Bachelet.
A senator, several reporters, 10 police officers and Chilean poet Raul Zurita were among those injured in the protest - billed as the first major demonstration since Bachelet took office last year.
'Tired of being milked'
The protesters said they were "tired of being milked for the benefit of a few." Police arrested 372 people.
The country's top union leader, Central Workers Union chief Arturo Martinez, said he organized the protest - which was also extended to the cities of Valparaiso, Rancagua and Concepcion - as a challenge to Bachelet.
Martinez said the president was mishandling the economy and had failed to keep her campaign promise of shrinking the gap between the haves and have-nots, which according to U.N. figures is the region's second largest behind Brazil.
Ten percent of the population in Chile holds 47 percent of the country's wealth, the United Nations Development program has said.
Bachelet, who went about business as usual during the demonstration, told reporters that Chilean democracy "doesn't need violence or unrest."
"In a democracy and under my government, workers will always be allowed to demonstrate peacefully for their rights and demands," she added.