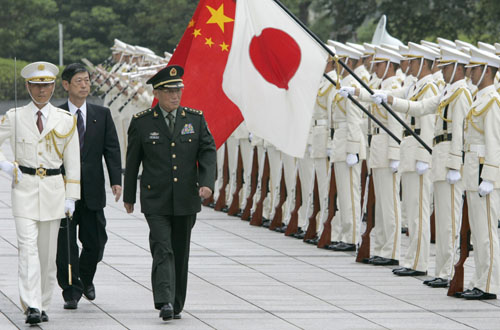 China tried to ease Tokyo's worries over its ballooning military spending in a meeting yesterday at which the Asian rivals' defense ministers agreed to stage the first-ever visit by a Chinese warship to Japan.
China's Defense Minister Cao Gangchuan's trip to Japan is the first by a Chinese defense minister in almost a decade, after top-level military exchanges ground to a halt due to strained bilateral ties.
Ties have warmed since Shinzo Abe took over as Japan's prime minister last September, but - like the United States and others in the region - Tokyo remains suspicious about the lack of transparency in China's ballooning military budget.
Cao also told Japanese defense Minister Masahiko Komura that China was keeping a close eye on how the close U.S.-Japan alliance would affect relations with Taiwan, which Beijing sees as a renegade province.
"The purpose of China's defense policy is to prevent an invasion, or to resist one if it does take place," a Japanese official quoted Cao as telling Komura in what he described as a frank and friendly meeting.
China said in March it would boost defense spending by 17.8 percent to about US$45 billion this year, but a U.S. Pentagon report in May said Beijing's total military-related spending could be more than double. That compared with a Japanese defense budget of US$40.7 billion.
China is a nuclear power and with more than 2.2 million active personnel, its military dwarfs the 260,250 members of Japan's armed forces, although Japan boasts modern technology.
Cao said China had sharply raised salaries for the troops and introduced new uniforms, which accounted for most of the rise.
The rest was attributable to modernization of equipment in line with international trends, he was quoted as saying.
Komura urged Cao to make public more information about China's military, giving a list of Japanese concerns ranging from the types of equipment Beijing is using to the positioning of its troops.
He also said an explanation of the unannounced arrival of a Chinese submarine in Japanese waters in 2004, as well as China's shooting down of one of its own disused satellites this year would help to put Japan's mind at rest over Beijing's intentions.
Abe moved quickly to repair ties with China, visiting Beijing weeks after he took office last year.
Sino-Japanese ties, long plagued by bitter Chinese memories of Japan's invasion and occupation in the 1930s and 1940s, had sunk to their worst state in decades under Abe's predecessor who angered Beijing with visits to a shrine where wartime leaders are honored along with war dead.
Japan's military remains constrained in its overseas activities by its post-war pacifist constitution.
But Abe - Japan's first premier born after World War II - is keen to revise that to enable Tokyo to play a bigger global and regional security role.
The two ministers agreed yesterday to set up a committee to look into the establishment of a hotline between the ministries, which analysts say would likely help avert a crisis in case of an incident like the incursion by the Chinese submarine.
Cao was set to visit troops today and pay a visit to the historic capital of Kyoto on Saturday, before leaving on Sunday.
The two ministers agreed that the first-ever call by a Chinese warship at a Japanese port - delayed since 2002 - should be arranged for November or December this year. A Japanese ship is to pay a reciprocal visit to China next year.?