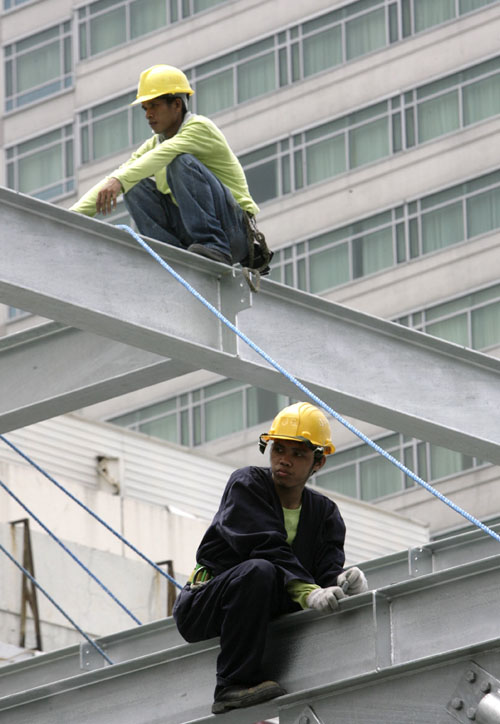 The Philippine economy grew 7.5 percent in the second quarter compared to a year ago, the fastest rate in two decades, Philippine President Gloria Macapagal Arroyo said yesterday.
"Our economic plan is working. Today we have the latest glowing indicators to show it," a beaming Arroyo told a nationally televised news conference on the better-than-expected data.
She said gross national product, which includes income from abroad, rose 8.3 percent for the second quarter from a year ago.
First-quarter economic growth, excluding the overseas income, was revised upward to 7.1 percent from the original 6.9 percent, pushing first-half GDP to an average 7.3 percent from a year ago, she added.
"We're confident of meeting our full year growth forecast of 6.1 percent to 6.7 percent," Arroyo said. The Philippines has defied expectations by increasing revenues, cracking down on tax cheats, strengthening the peso, boosting the stock market, balancing the budget, prepaying its debts and creating more jobs, she said.
The services sector remained the economy's linchpin, registering strong growth of 8.4 percent, while industry posted 8 percent growth, said Estrella Domingo, assistant secretary general of the National Statistical Coordination Board.
Arroyo said newfound money for investment has allowed the economy to increase its growth pace.
"While our economy has reached a new level of maturity and stability with one of the strongest macro-economic fundamentals in two decades, we should not rest, but push forward and sustain the momentum," she said.
Arroyo said revenue and deficit targets must be achieved to maintain investor and creditor confidence and keep the flow of low-interest capital strong.