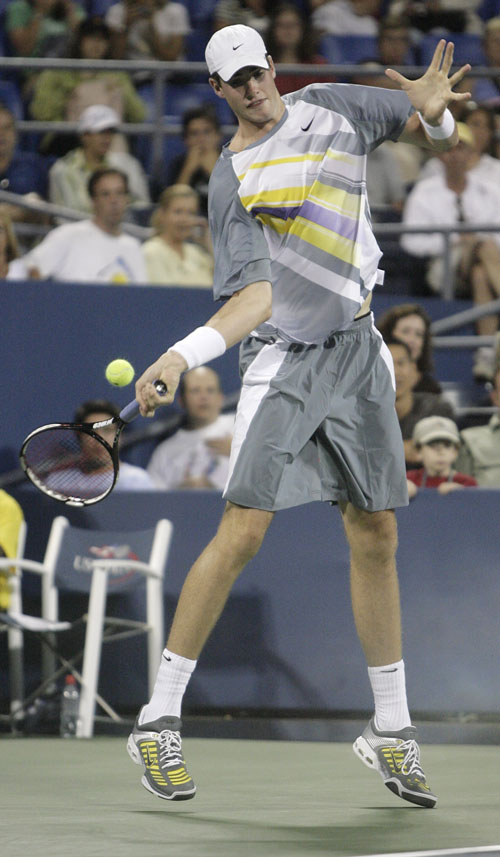 John Isner admits he will need to play way over his head. And this is a guy who's 206 centimeters tall.
Because after winning Wednesday, next up for the American at the US Open is Roger Federer. He was always Isner's favorite, the only player he enjoyed watching on television.
"I don't know if it's going to help me out. I don't know if anything's going to help me out," Isner said. "I'm going to believe. I'm not saying I'm going to win, but I'm going to believe."
The Williams sisters, Rafael Nadal and Justine Henin advanced to the second round as expected on Wednesday, but Isner's progress was less predictable. After knocking out seeded Jarkko Nieminen in the first round, Isner - ranked 184 in the world - booked a place in round three by beating South Africa's Rik de Voest 6-3, 6-3, 7-6 (4).
"Look, he's new," Federer said. "New kid on the block."
Maria Sharapova, Andy Roddick and James Blake were among the top players scheduled to play later yesterday (early today Taiwan time).
Bulldog pride
A few months ago, Isner finished his senior year by leading the University of Georgia to the collegiate NCAA team title. He proudly wears his school hat, the one with the giant G, every chance he gets.
Georgia's mascot is a bulldog, and Isner had his fans barking with some rocket serves. The father of one of his best friends tried something else.
"He came up today and did this Bulldog bark. He growls and barks. He did that a couple times tonight, got the crowd going," Isner said. "Pretty neat."
Now, Isner gets to face the player he called "the most dominant athlete in the world, any sport."
"I guess going into the US Open, I'm thinking I might draw him first round. I never would have imagined playing him in the third round of the US Open," he said.
Federer, as usual, made it look easy. Trying for his fourth straight US Open title, he dismantled Paul Capdeville 6-1, 6-4, 6-4.
For the third straight day, the favorites kept winning. Easily, for the most part.
The exception was Nadal.
His knee was taped up, the pain was so bad he nearly pulled out of the tournament. He lost the first six points of the match, then the three-time French Open winner hit his stride and beat Australian wildcard Alun Jones 7-5, 3-6, 6-4, 6-1 in the first round.
"I didn't run too much, no? I can't move too much," the No. 2-seeded Nadal said. "Difficult to play like this, especially here."
Nadal felt a "sharp pain" in his left knee Sunday during a practice session. He had an MRI exam and got treatment the next two days from a doctor with the Italian tennis federation known for laser treatments.
Hobbled by injuries over the years, the Williams sisters did fine.
Venus Williams overcame six double-faults for a 6-4, 6-2 victory against Ioana Raluca Olaru of Romania.
Williams is a two-time winner at Flushing Meadows and a four-time champ at Wimbledon. She definitely feels a different vibe when she comes to New York.
"The US Open is really, really intense. That's just the take I get on it," she said. "Just the city, just all the people. The stadium's huge."
Serena Williams, also a two-time champ here, moved into the third round by beating Maria Elena Camerin of Italy 7-5, 6-2.
Williams let loose a few piercing shouts - some excited, others exasperated - during the win.
"I feel a lot better than I did in my first match," she said. "I love playing under the lights."
Serena occasionally grimaced, rolled her eyes or tapped her racket after missed shots.
"She likes to be an actress," Camerin said.
Serena also kept focused, occasionally checking handwritten notes in a pink notebook during changeovers.
Henin advances
Top-seeded women's player Henin advanced into the third round with a 6-4, 6-0 win over Tsvetana Pironkova of Bulgaria.
The Belgian, bidding for her seventh major title, broke Pironkova's spirit midway through the final set.
"I know I have to work hard because I know a lot of surprises can happen, even if it looks easy," Henin said. "You have to be careful all the time."
Former Open champion Marat Safin, Ana Ivanovic, Tommy Robredo, Marion Bartoli, Mikhail Youzhny, Elena Dementieva, Carlos Moya and Sybille Bammer were among those who also won in straight sets.
"Hopefully, it'll continue this way and keep it short," Safin said after beating Frank Dancevic of Canada 7-5, 7-6 (5), 7-6 (7).
Tim Henman, playing his final Grand Slam, also advanced. The unseeded Brit beat No. 27 Dmitry Tursunov of Russia 6-4, 3-6, 6-3, 6-4.