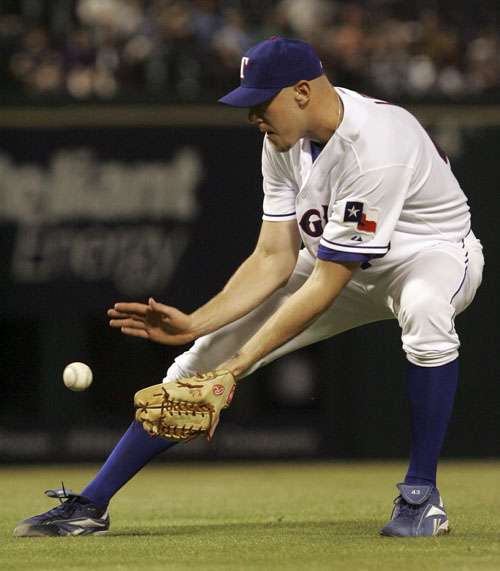 After watching the Chicago White Sox's offense sink to a new low Wednesday night, manager Ozzie Guillen fired his own attack during a 4-minute tirade.
"The offense threw dirt on the grave," Guillen said after the Sox managed five hits in 11 innings of a 5-4 loss to the Rangers.
The Sox lost for the seventh time in their last eight games, and Guillen ripped an offense that is hitting only .244, struck out 13 times and saw an early lead wasted when Sammy Sosa hit a sacrifice fly in the bottom of the 11th off Boone Logan.
"Well, they're killing me," Guillen said. "They're killing my family. They're killing my coaching staff, killing the White Sox fans. They kill the owner. They kill everyone. I hope they feel the same way we feel."
Guillen sounded as if he ran out of answers.
"You don't see this today," Guillen said. "You've seen this since April. I keep giving people a chance to succeed, a pat on the back. I wish I played for a manager like that. I swear to God I wish I could have played for a (expletive) manager like that. Every time you fail and keep putting guys out there who fail day in and day out, that's easy to play.
"A US$100 million payroll and those guys don't show how much they make in the field. Well, Kenny (Williams), I don't say what he has to do, but we play like this and spend all that money on the club like that, I will shut the payroll and go with Double-A kids if we have to, because it's not easy. I know those guys go out there and they care about it."
Guillen put out a call to a clubhouse that was empty after the game.
"I hope somebody out there cares the way we care," he said. "Good guys or nice guys finish (expletive) last. I'm tired of seeing that (expletive), day in and day out. And I don't want to spend a miserable September seeing the same (expletive). If I have to see the same (expletive), I told Kenny, `Bring somebody up. (Expletive) it.'
"If it's my fault, I should be moving out of here then. If it's my fault, (expletive) fire my (expletive) and I'll be fine. I have the job to do and I get paid a lot of (expletive) money to make this club work, but it's not easy to work with people like that. It's not easy."
In Wednesday's other American League action: Oakland 5, Toronto 4, (11); L.A. Angels 8, Seattle 2; N.Y. Yankees 4, Boston 3; Cleveland 4, Minnesota 3; Tampa Bay 5, Baltimore 4, (12); Kansas City 5, Detroit 0; Texas 5, Chicago White Sox 4, (11).
In Wednesday's National League action: LA Dodgers 10, Washington 9 (12); Colorado 8, San Francisco 0; Philadelphia 3, NY Mets 2; Atlanta 7, Florida 4; Cincinnati 8, Pittsburgh 0; Milwaukee 6, Chicago Cubs 1; Houston 7, St Louis 0; San Diego 3, Arizona 1.