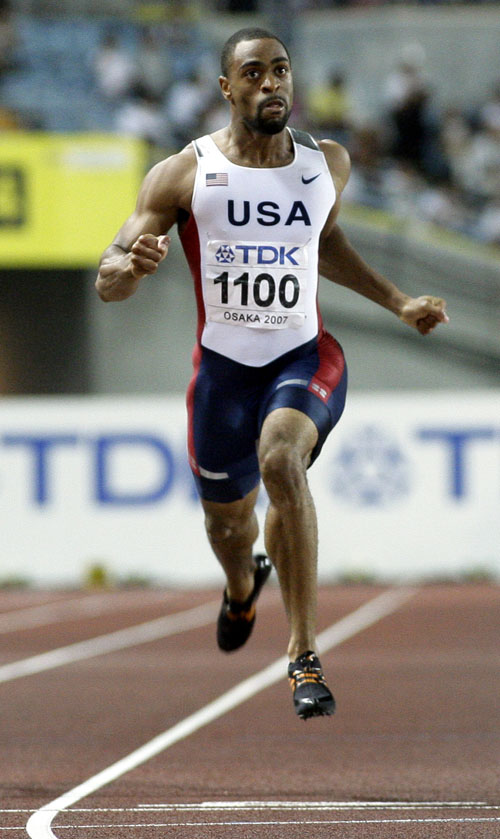 Tyson Gay proved yesterday he is in a class of his own when he completed a sprint double at the world championships with a win in the 200 meters.
This weekend, he can do even better - join Carl Lewis and Maurice Greene with a triple at the world championships.
Gay caught up with Jamaica's Usain Bolt halfway through the 200 meters and let his legs power through the rest of the way to win in a championship record of 19.76 seconds.
Bolt was .15 seconds behind and Gay's U.S. teammate Wallace Spearmon took bronze in 20.05. A third American, Rodney Martin finished fourth in 20.06.
"I got beaten by the No. 1 man in the world," Bolt said.
This time there was none of the over-the-top breastbeating and shouting that followed his victory over world record holder Asafa Powell in the 100. It was only evident after he crossed the line what eight races in six days had taken out of him.
He hunched down in contemplation and stuck one finger in the air.
And he still has Sunday's 400-meter relays to come. He could get a third gold if he can keep the Jamaicans at bay.
Only two men have achieved it at the world championships. Lewis won three in 1983 and 1987 and Greene in 1999.
Gay's gold gave the United six in total and 13 medals overall to dominate the standings. Russia has 3 gold and 10 overall. Kenya is third with 3 gold and 8 medals.
Earlier Jana Rawlinson proved that titles and records mean little - and that motherhood can strengthen a runner, not break her.
Facing Russian defending champion and 400-meter hurdles world record holder Yuliya Pechonkina, the Australian took over the race midway through and held on over a tense finishing stretch to reclaim the title she first took in 2003.
Just over eight months after giving birth to Cornelis, the 24-year-old came back as strong as ever.
"The last 18 months have been truly incredible. Getting married, having a baby and then coming and winning a world title. I don't think you can beat that," Rawlinson said.
Rawlinson finished in 53.31 seconds. Pechenkina took silver in 53.50 and Anna Jesien of Poland was third in 53.92.
In the long jump, Panama's Irving Saladino rallied on the last attempt of the competition to beat Andrew Howe with a leap 8.57. One attempt earlier, Howe, the Los Amgeles-born Italian, jumped a national record 8.47 meters which had given him the lead.
Defending champion Dwight Phillips took bronze.
China won its first medal of the championships when Zhang Wenxiu took bronze in the hammer throw behind Germany's Betty Heidler and Cuban Yipsi Moreno.
Heidler threw 74.76 on her second attempt, 2 centimeters better than Moreno, who was seeking her third title. Instead, she won her second silver in a row. Zhang threw 74.39.