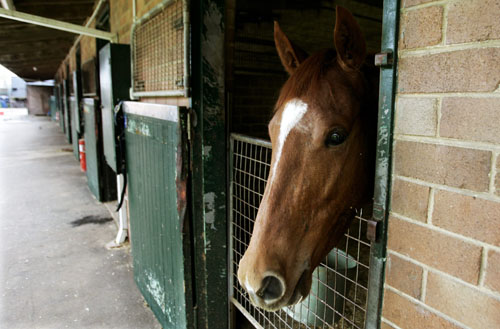 One of Australia's biggest race meets - the Sydney spring carnival - was postponed indefinitely after eight of 10 horses from a Randwick stable tested positive yesterday for equine influenza.
Ian Macdonald, the primary industries minister for New South Wales state, said the quarantine would extend for 30 days from the last case of equine flu, and that it was likely racing would be shut down at Randwick for at least two months.
They were the first race horses affected by the virus. Macdonald said there were about 700 race horses trained at the Randwick track, and the majority are expected to eventually be affected by the highly contagious illness.
"Racing and the Randwick spring carnival will come to a total halt and it has the impact of stopping racing for a considerable period of time," Macdonald said.
Several hundred recreational horses in dozens of locations throughout New South Wales and Queensland states were struck down previously by Australia's first outbreak of the flu, a respiratory disease which affects a horse for two to three weeks with a fever, hacking cough, nasal discharge and tiredness. It is seldom fatal.
Initial estimates put losses to the country's racing industry at up to 1 billion Australian dollars (US$816 million). Government officials announced yesterday a 4 million Australian dollar (US$3.25 million) fund to provide grants to those affected by the outbreak, including jockeys and track workers.
'A grim, black day'
Racing New South Wales chief executive Peter V'Landys said the industry, first hit by the outbreak last weekend when racing across much of Australia was canceled, was in "turmoil."
"It is more than a disaster, it is a grim, black day," V'Landys said yesterday.
V'Landys said the Sydney race meeting postponement - and it will likely have to be canceled - will have a significant impact on the Melbourne spring carnival, including the Melbourne Cup, Australia's richest and most prestigious horse race, on November 6 at Flemington.
"It will be felt outside," said V'Landys. "The cream of the horses are based at Randwick and Warwick Farm (in Sydney); you have leading trainers at Randwick. None of those horses now will be able to compete in Melbourne."
While the positive flu result in Sydney garnered the most attention, 100 people - 30 of them children - remained quarantined as part of the outbreak at Warwick, in Queensland state. Although the flu does not affect humans, the disease can be carried on clothing or footwear.
Those under quarantine at Morgan Park were attending a competition there last weekend when one of the horses came down with the flu. Officials said 80 of the 250 horses being held in quarantine have now been affected, and the people under quarantine will have to remain there until 30 days after the last horse is infected.
Temporary buildings have been set up, washing machines sent in, local grocery stores are providing food and counselors are being provided for those distressed by their situation.
"We are being set up as a small self-sufficient community village and the support from the outside world has been great" Red Weatherill, a member of the crisis management team, said. "There's nothing we can do about it and everyone is pitching in and getting things done."