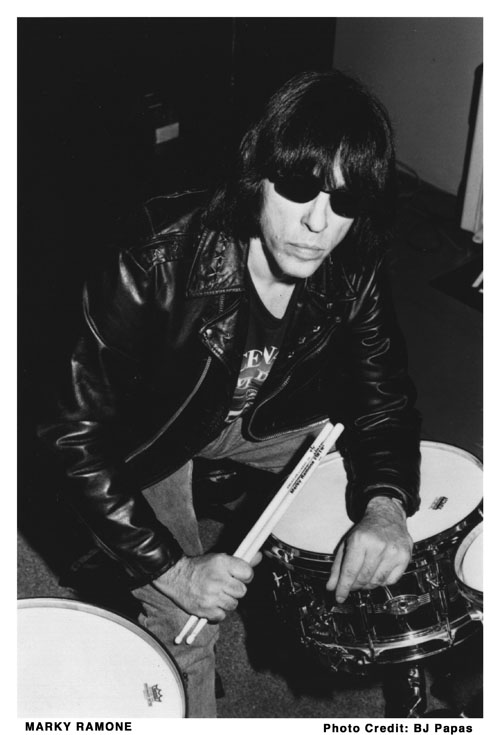 There is something seriously wrong here. Despite the fact you can't swing a cat in Ximending without hitting someone wearing a shirt or hat emblazoned with the Ramones logo, a show billed as "the last chance to see the Ramones in Asia," originally scheduled for tonight at the Wall in Taipei, has been canceled due to a lack of advance ticket sales.
True, three of the four long-term members of the band are dead. Drummer Marky Ramone wouldn't be happy having the show billed as a Ramones show - he prefers "Marky Ramone and friends." Still, for what Spin magazine in 2002 called the second-best rock and roll band ever - the Beatles were first - you'd think that Marky wouldn't have trouble selling out a venue that holds only 600 people. Yet a month after announcing the show in mid-July, the Wall had sold a measly 150 tickets.
According to Kev Lee, the show's de facto promoter, Marky's cancellation underscores the difficulty of getting small and medium-sized acts to Taiwan.
"Unfortunately, Taiwan just doesn't have a tradition of shows selling out early," says Lee, the Australian expat behind Leek Records and singer/guitarist for local punk outfit Consider the Meek.
Lee, though quick to point out that he's "not a real promoter," is active in bringing bands to the island. He helped arrange the NOFX show this April, and when Marky Ramone heard about how successful it was, he called Lee.
Having done some international touring as part of Consider the Meek, Lee should have a pretty good idea of how to organize a gig. Now he has a good idea of how not to organize one.
It should have worked. Despite what you might think, Taiwan isn't geographically doomed to be just a quick stop for big pop acts between Hong Kong and Australia. The key, Lee says, is Japan.
"A lot of western bands are annoyed that they have to fly all the way to Tokyo and then turn around and fly back home again." Taiwan could fill that niche, Lee says.
So what's the problem?
First, paltry advanced ticket sales. Lee encountered the same situation with NOFX: two weeks before the showdate, only 200 tickets had been sold.
"We were lucky," Lee says. NOFX had already planned to front their own travel expenses; in return Lee and the Wall agreed to give them 100 percent of door sales. The band needed to sell 400 tickets to break even.
By the time NOFX took the stage, they had sold all 600 tickets and were forced to turn away 300 people at the door.
Lee has no doubt the Marky Ramone show would have sold out. But if Taiwan wants to have quality rock shows, he says, promoters need to have enough money on hand to guarantee it.
"There are still lots of stories of bands that fly themselves across the world and then the crowds just don't show up," he says.
But finding funders isn't easy. For an NT$350 per ticket show Lee is currently promoting, he's asking sponsors to give NT$3,000 for 10 tickets and free advertising. No one's biting.
Although raising the money to cover a band's traveling expenses is tiresome, time-consuming, and financially risky, the second problem could be much worse: Local rockers seem to prefer plugging miniature plastic speakers in their ears to seeing actual gigs. As ex-hoodlum and former President Chiang Kai-shek said while ex-librarian Mao Zedong was whooping his wet Whampoa wagger into retreat: One is a disease of the skin, the other a disease of the heart.
As we spoke last Saturday, Lee noted that the Velvet Underground, a rock club under the Shinkong Mitsukoshi across from Taipei Main Station, was shutting down the following night. Never heard of the rock club Velvet Underground? Perhaps that's the problem.
Even the Wall, opened in 2002 to showcase Taiwan's rock scene, was forced to remodel and start hosting dance parties a couple years ago. When I stopped by to get a refund for my Marky Ramone ticket last Thursday, the door to the Wall's auditorium was locked and only scattered groups of people hung around the new bar they've opened in the hallway between the White Wabbit records shop and the tattoo parlor.
Meanwhile, the crowds at Brass Monkey, 9%, and Carnegie's mid-week Ladies' Nights don't seem to be thinning. As for tonight, other clubs are offering a "Bikini Fever Party" and a "Wet T-shirt Party." Never one to fall behind, Luxy is staying abreast of the trend with "Hot Chick Boxing."
For those of us not into the boom-boom electronic drum roll scene, let's hope Joey, Johnny, and Dee Dee Ramone are spinning in their graves fast enough to bore a hole here and save us.
Lee's optimistic and is trying to reschedule Marky for next May.
In the meantime, Lee is promoting two shows featuring Japanese all-girl punk quartet Akiakane and Consider the Meek at APA Lounge 808 in Ximending, Taipei on November 9 and 10 (NT$350 in advance/NT$450 at the door). Write to leekrecords@hotmail.com for tickets or details.