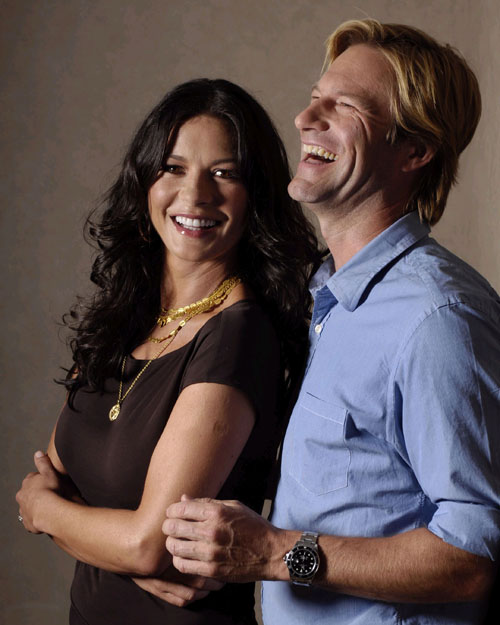 The subset of reality TV involving dirty dishings in kitchen settings - "Top Chef," "Hell's Kitchen," "The Next Food Network Star" - tries to put a soupcon of sexiness on the menu, but usually ends up looking like some kind of restaurant porn: The hottest moments are reserved for the main courses. In contrast, "No Reservations," a romantic comedy-drama which opened last Friday, goes for its steam simply by letting stars Catherine Zeta-Jones and Aaron Eckhart occupy the same space while wearing tasty white cooking smocks.
The film, a remake of the 2002 German film "Mostly Martha," follows Kate (Zeta-Jones), a control-freak Manhattan chef in a Greenwich Village bistro whose ordered life is up-ended when her sister is killed in a car accident, leaving Kate to raise her 9-year-old niece Zoe ("Little Miss Sunshine" Academy Award nominee Abigail Breslin). While Kate copes with her loss, the restaurant's owner (Patricia Clarkson) hires a sous-chef to keep things rolling - but Nick (Eckhart) immediately grates on Kate: She's steely precision, he's freewheeling artiste; she's the cook-as-commandant, he's a loud-pants-wearing, opera-blasting iconoclast. But, with some prodding from Zoe, a courtship begins to simmer between the two.
And in conversation, the actors add flavor to each other: Zeta-Jones, the sexy Welsh stunner who unmasked Zorro, ensnared Sean Connery in "Entrapment" and won an Oscar for her knock-'em-dead murderess in "Chicago"; Eckhart, the Californian with the SAG-card-carrying chin who combined charm with smarm in "Thank You for Smoking" and "In the Company of Men," and who will next join the "Batman" franchise as Harvey Dent - aka the villainous Two-Face - in next summer's "The Dark Knight."
"The best movie romances are told through some other vehicle - the characters fall in love via something else," says Eckhart, 39. "That's true in this movie, in terms of the food, the working relationship, what's going on in the restaurant kitchen, everything with Abigail's character ... everything, actually, but us, and then 'us' becomes an inevitability afterward. But it's better to arrive at that in a different way."
"Some actors get extremely uncomfortable with romances onscreen, but for us, it was fun because the whole sequence of how we really get together has this very sexy, secretive play going on," says Zeta-Jones, 37, widening her chocolate-brown eyes for emphasis. And, she adds, in terms of movie romances, "You never know when two opposites get together, and there'll be movie magic."
Both have tried these ingredients before ("Erin Brockovich" and "Possession" for him, "Intolerable Cruelty" and "The Terminal" for her), but mainly, despite ranking what anyone would consider high on the Hollywood attractiveness meter, they've gravitated toward other kinds of projects.
"It's actually scary for an actor to do romantic films, especially ones with any comedy in them, because those films don't get the respect I think they deserve," says Eckhart. "It's like somehow you're selling your soul, know what I mean? It's not as credible, and when you tell people you're doing one, they sometimes ask, 'Why?' And it's like, well, because it's difficult to do, not a lot of people are doing it successfully, and it really makes people happy when they see a romantic comedy that works.
"I think it's more dangerous than going out and playing, for me, the manipulative, Machiavellian guy, the fast talker. That stuff is easy."
"Also, sometimes," notes Zeta-Jones, "if the people onscreen seem to be having way too much fun, and there's way too many hijinks, the audience thinks, 'Wait a minute - I'm not having as much fun as they are!' There's a responsibility you have. Though sometimes you do have to go all out."