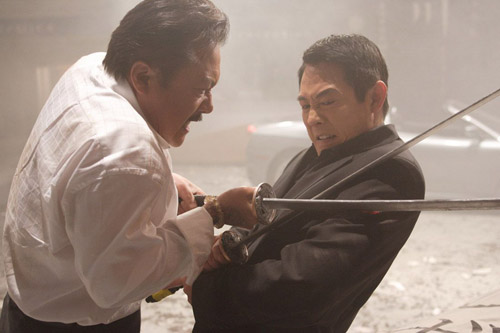 Rogue Assassin
玩命對戰
Directed by: Philip G. Atwell
Starring: Jason Statham, Jet Li, Devon Aoki, Luis Guzman, Ryo Ishibashi and Saul Rubinek
Opens: Today, August 31
When the Chinese Triads finally mix it up with the Japanese Yakuza, they'll have the trash talk all worked out, thanks to "Rogue Assassin."
Triad hoodlum to yakuza thugs in this new Jet Li picture: "Hey, Buddha-heads!"
That's telling' em. All that's left is for the Yakuza to yell back, "Confused, Confucians?"
"Rogue Assassin" is another generic Jet Li thriller, with body-blows and bullets and blood and naked bodies, a few chases, lots of shoot-outs and a plot-twist of a finale that is, at least, surprising, even if it makes little sense.
Jason Statham stars as an FBI agent whose partner and the partner's entire family are killed in an opening scene. He's a man obsessed with avenging that murder.
The guy he's after is nicknamed "Rogue," as in rogue assassin. Jet Li plays him.
They spar over a period of years in a growing San Francisco conflict that is consuming the Yakuza, the international Japanese mob, and the Triads, the international Chinese mob. John Lone of "The Last Emperor" is top-dog for the Triads. Devon Aoki, the baby-faced archer of "Sin City," is daughter of the Yakuza boss.
Li, dapper in black suits, black shirts, black shades and big, big guns, is darned cool until he mangles English in that squeaky little voice of his. His Rogue is all about the psychology of his foe.
"I saw it in your eyes - pain, rage, loneliness."
Golly.
The plot line this could've followed involves the fact that Statham's Fed is every bit the "rogue" that Li's hired killer is. He tortures and executes suspects.
Instead, Statham plays his usual stubbled stud here, all attitude and menace and tough talk. He adds a toothpick to his repertoire.
There is but one city that can host a decent car chase, and it is San Francisco. There are a couple of passable ones in "Rogue Assassin." The fight scenes were choreographed by Cory Yuen, and one of them stands out.
The film was directed by Philip Atwell, a veteran of TV's "The Shield" and assorted rap videos. Atwell doesn't break Li's streak of badly acted Hollywood performances or give us anything new in what is firstly and lastly a genre picture, and a pretty tired one at that.
But stick around for the finale. It's a lulu, at least in terms of having to be seen to be believed. Then again, the same screenwriter who came up with "Hey, Buddha-heads!" wrote it, so there you go.