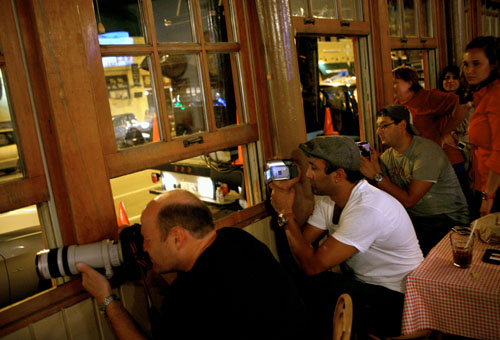 Tires screeching, we wheeled around the corner of Rush and Chicago, barely missing a pack of pedestrians. "Sorry folks - watch it!" the photographer yelled as he pounded the accelerator of his SUV and sped east on Chicago.
He was on the hunt, chasing a black Ford Expedition belonging to the Angelina Jolie-Brad Pitt entourage, and it had just departed the Peninsula Hotel. I'd been interviewing the photographer in his SUV, and when the chase began I went along for the wild ride.
He and the dozen other paparazzi tailing the Expedition had no clue who was inside. At the moment, though, the vehicle's human cargo was beside the point. Thanks to the caprices of a traffic control aide, eight taxis, a Ford F-150 and an OfficeMax truck, the photographer - with me, slightly nervous, in the passenger seat - was trailing his quarry by several blocks.
Our chase began at the Peninsula, the luxury hotel where Pitt, Jolie and their ever-expanding brood stayed while Jolie was in Chicago shooting the movie "Wanted." When I arrived there that morning, I saw no signs that a dozen or so paparazzi were staking out the hotel.
The paparazzi are a secretive lot. Some are tight-lipped because they want to safeguard their turf and tipsters. Others worry about the negative publicity that accompanies their work. The paparazzo I was with asked that we not use his name because he was concerned it would upset some of his clients, acknowledging the hypocrisy of invading others' privacy while protecting his own.
"People do a lot of things in this business that they aren't happy about, that they don't tell everybody else about," he said. "People know who I am. It's just a little different when you make the paper and you're the poster child for an organization."
While some photographers work full time as paparazzi, many alternate chasing stars with more conventional gigs.
"Sometimes, the people who do this work for the local newspaper and are just (photographing celebrities) on the side to make some money," said Francois Navarre, founder and president of X17, one of the largest paparazzi agencies in Los Angeles.
The paparazzi are aware of the negative implications associated with their job. Critics say that their pursuit of their targets borders on stalking, and that the high-speed chases they instigate endanger celebrities and innocent motorists. But most paparazzi are quick to say that they're just another part of our celebrity-driven culture, that the stars are perfectly aware when they're being photographed and that many don't exactly mind when they see their faces in People magazine.
"We aren't trespassing; we're just trying to get a story," said Raul Rodriguez, a paparazzo from Los Angeles who came to Chicago in pursuit of Jolie. "I haven't seen any pictures from when she's been here where she looks upset. She's smiling, enjoying her work, enjoying being with her kids and Brad.
"It's part of the game," he added. "We're basically contributing to their publicity."
Rodriguez said that in the eight years he's been photographing celebrities, he's never been involved in a car accident. But he acknowledged that sometimes things can get out of hand when the paparazzi are chasing a target.
"In Los Angeles, it's really tense," he said. "There are people who don't have the skills to drive. They're nervous. They want to get the photos."
It might seem odd that Jolie and Pitt's brief jaunt to Chicago has drawn Rodriguez and other paparazzi away from the star-laden streets of New York and Los Angeles. But Jolie and Pitt are at the top of the celebrity A-list not necessarily in terms of talent, but in terms of their ability to draw readers to celebrity magazines.
"It changes every week, but they're always in the top 10," Navarre said. "Right now, No. 1 is Britney (Spears), then Katie Holmes, then Angelina."
And so, knowing that their payday is relaxing within the walls of the Peninsula, the paparazzi wait, eyes trained on the Peninsula's loading dock. "Sometimes they wait a week for nothing," Navarre said. "It happens all the time."
Thus far, we had no idea where the Expedition was going. Earlier, the paparazzo had speculated that some of Jolie's children might be in the Expedition, but neither of us could think of any child-friendly destinations this far north. The caravan turned right on Western and again on Lawrence. Suddenly, the paparazzo's face lit up. "I know where we're going!" he exclaimed. "There's a toy store around here."
Sure enough, the line of cars immediately veered right on North Lincoln, and the Expedition came to a halt in front of Timeless Toys. The paparazzo jumped from his car and sprinted down the street. I remained in the car, feeling mildly nauseated. A couple of moments later, he returned, triumphant: He had snapped a shot of Jolie carrying daughter Zahara into the store.
Suddenly, three police cruisers pulled up to the curb, and several Kevlar vest-clad officers strode into the store. The paparazzi realized that Jolie was indeed trying to exit from the store's rear, and they sprinted through the parking lot, catching a glimpse of Jolie and Zahara before the pair escaped. A couple jumped in their cars to resume the chase, but the police officers quashed their efforts by blocking the alley behind the store with a squad car.
"I don't know where they're going, and I don't care," the paparazzo said as he walked back to his car. "I got my photo. I'm happy."