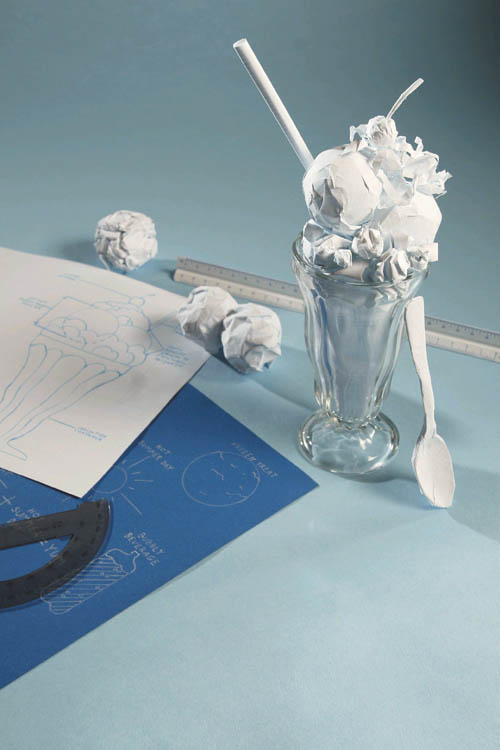 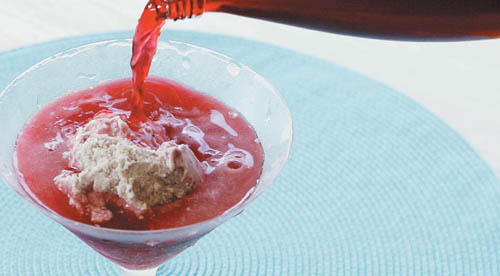 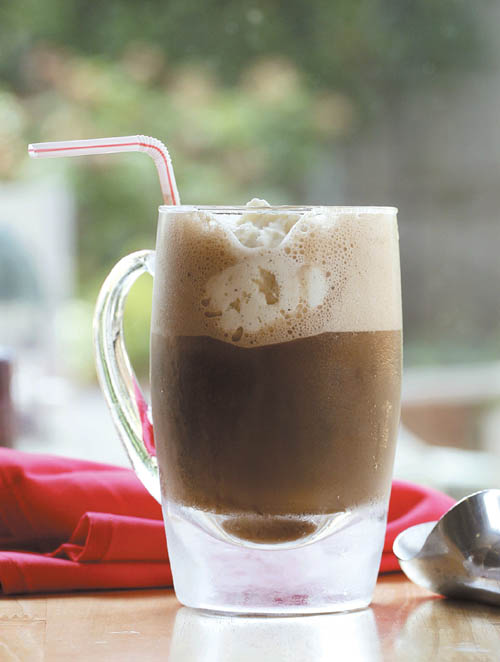 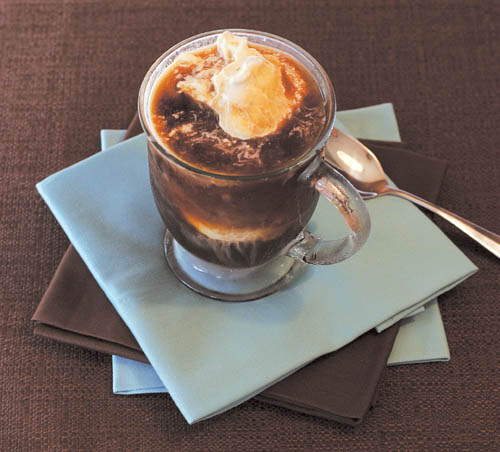 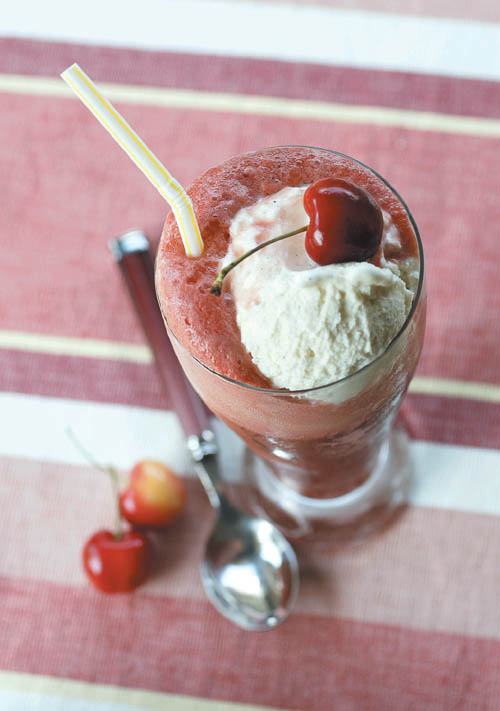 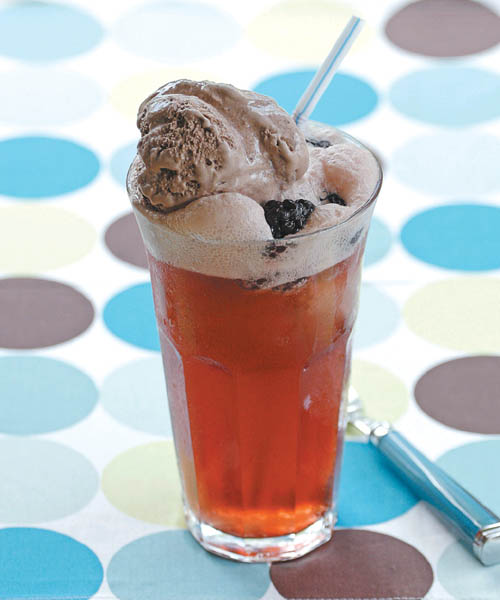 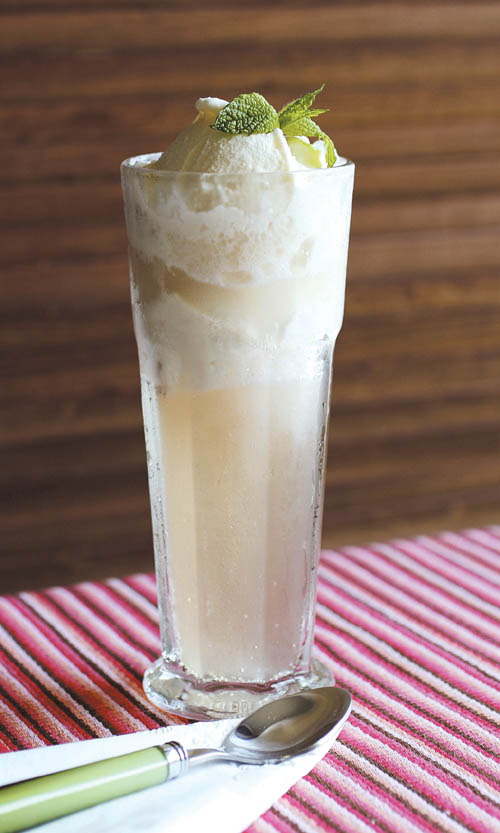 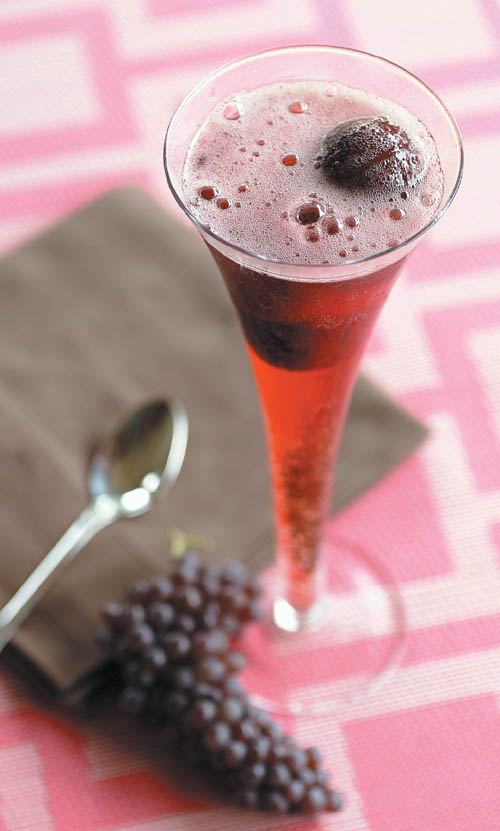 Exciting "and" comforting: It's a combination that's hard to beat.
That's why the current trend of reimagining nostalgic comfort food with new and unexpected twists and ingredients is so much fun: You get the best of both worlds. And what could be more fun than an ice-cream float?
Who doesn't smile at the thought of an old-fashioned float, cradled in its frosty glass, with its infinite range of variations between liquid and frozen, its fizz of carbonation prickling the nose as one bends to the straw? It's a roller coaster of flavors and sensations in itself, and adding some surprises just kicks up the thrill level.
When we started to think about ways to update the classic, we realized that the possibilities were pretty much endless. Just check out the variety of flavored sodas on the market, not to mention the bounty on the freezer shelves, which these days hold single-estate chocolate ice creams and sorbets made from fruits nobody knows how to pronounce.
You can turn to high-end chefs for inspiration: Celebrated Chicago pastry chef Gale Gand makes her own vanilla soda and root-beer ice cream for her signature "reverse" float; TV chef Ming Tsai does a version with homemade ginger ale and lemon-grass ice cream.
Or you can follow the lead of Fort Worth's Dena Peterson, who still gets requests for the Dublin Dr Pepper float she featured on one of her menus at the Cafe Modern: Choose a dramatic glass - in this case, the tallest pilsener she could find - use the best ice cream and soda you can afford, stick in an iced-tea spoon and a festive straw, and stand back.
Red spumante and blackberry
The liquid: Ballatore Rosso Red Spumante, a sweet strawberry/raspberry-flavored Italian sparkling wine.
The solid: We used a blackberry cabernet sorbet, but any blackberry sorbet will do. Make the mini scoops ahead and freeze them on a sheet pan; a melon baller was the tool we first thought of, but then we found a mini ice-cream scoop.
The glass: A gracefully flared champagne flute.
Pomegranate soda and
blueberry
The liquid: Pomegranate, the flavor du jour, is showing up in an ever-widening variety of sodas, but you could also used bottled pomegranate juice and club soda or sparkling water.
The solid: Blueberry sorbet or ice cream makes a magical match with the refreshing pomegranate.
The glass: The ever-cool martini glass.
Sparkling lemonade and peach
The liquid: French sparkling lemonade, but you could use any not-too-sweet citrus soda, or spike bottled or homemade lemonade with a spritz of fizzy water.
The solid: Peach and vanilla ice cream.
The glass: Contemporary pint glass.
Coffee and pistachio
The liquid: Very strong coffee, sweetened (we used 1/4 cup sugar to 3 cups of coffee) and chilled in the freezer till slushy.
The solid: Pistachio ice cream.
The glass: Oversize clear glass coffee mug.
Jamaican-style ginger beer and coconut
The liquid: A spicy ginger beer made with lots of ginger (look for the words "Jamaican-style" or "extra-strength"); these leave wimpy ol' ginger ale in the dust.
The solid: Coconut ice cream is the perfect tropical pairing for the spicy ginger brew.
The glass: A slender, elongated take on the pint glass.
The blueprints
The liquid: Here's where you can be most adventurous. Experiment with natural- and designer-soda brands; look for European options like sparkling lemonade. Whole Foods has house-brand Italian-style fruit sodas. Or look for a rainbow of Mexican sodas.
Generally, you want something with fizz, but a successful float can be made from fruit juice or coffee. You can top off the glass with sparkling water or club soda.
Alcoholic beverages are less adaptable to floats (though we've seen beer floats made with stout). Still, we hit a home run with our float made with an inexpensive berry-flavored sweet Italian sparkling wine.
The solid: You're only talking two ingredients here, so you want the best ice cream you can afford. Stick to pure flavors, though, rather than baroque combinations; floats are not the place for add-ins such as candy bits, because as the ice cream melts they can precipitate out as debris in the bottom of the glass.
The glass: Choosing striking glassware can push even a classic float combination into the chic zone: pilseners, pint glasses, tall tumblers. Wide, shallow glasses such as coupes or margarita glasses usually don't work as well, but we successfully downsized a float in a martini glass. Our most sophisticated float update: a flaring champagne flute filled with mini sorbet scoops.