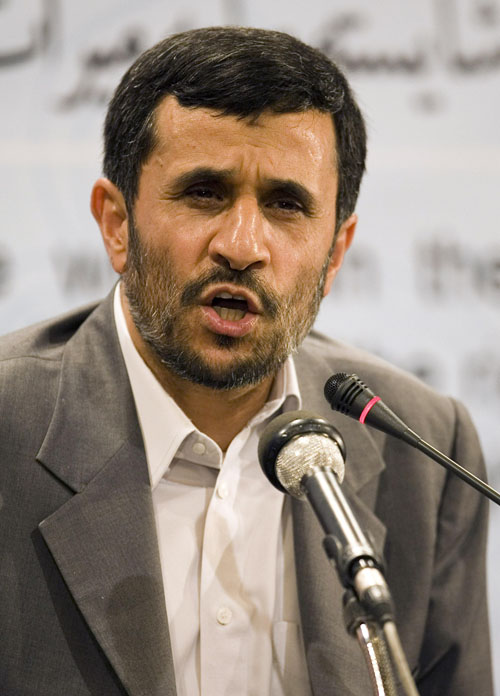 The United States demanded on Tuesday that Iran end support for extremists in Iraq "at once" and raised the specter of a "nuclear holocaust" in the Middle East if Tehran gets atomic weapons.
U.S. President George W. Bush branded the Islamic republic "the world's leading state sponsor of terrorism," and accused it of backing Hamas, Hezbollah, Islamic Jihad and Shiite fighters killing U.S. troops in Iraq.
"Iran's actions threaten the security of nations everywhere, and the U.S. is rallying friends and allies to isolate Iran's regime, to impose economic sanctions. We will confront this danger before it is too late, " he told the American Legion veterans group.
Bush, whose speech was billed a defense of U.S. efforts in Iraq, said Tehran must starve Shiite fighters in Iraq of weapons, equipment and training whether or not Iran's leaders know about such operations and have given their blessing.
"Either way, they cannot escape responsibility for aiding attacks against coalition forces and the murder of innocent Iraqis," he said, as the White House warned in a statement that Iran must act "at once."
Shortly before Bush spoke, Iranian President Mahmoud Ahmadinejad said Iran and neighboring countries were ready to fill the "power vacuum" emerging in the Middle East as U.S. power in Iraq wanes.
"You (the United States) cannot preserve your power over Iraq with a few tanks, artillery and weapons. Today, you are prisoners of your own quagmire. You have no choice but to accept the rights of the Iraqi people," Ahmadinejad said.
"I can tell you there will be a power vacuum in the region. We are ready with other regional countries, such as Saudi Arabia, and the people of Iraq, to fill this vacuum."
Some Western analysts have argued that Iran has been the chief beneficiary of the U.S. invasion that toppled Saddam Hussein in 2003, helping Tehran to boost its influence in the region.
Ahmadinejad also dismissed the chance of any U.S. attack on Iran over its nuclear drive.
The United States accuses Iran - OPEC's number two oil producer and owner of the second largest proven gas reserves in the world - of seeking to make nuclear weapons under the guise of a civilian energy drive. Iran insists that the drive is entirely peaceful.
Delegation released
A group of eight Iranians, including two diplomats, were released by U.S. forces yesterday after being detained because unauthorized weapons were found in their cars, the U.S. military said.
Saadi Othman, an adviser to the top U.S. general in Iraq, General David Petraeus, said the incident was "regrettable" and had "nothing to do" with U.S. President George W. Bush's remarks on Tuesday.
Iranian Foreign Ministry spokesman Mohammad Ali Hosseini called the U.S. action an act of "interference" in Iraq's internal affairs and "inconsistent" with the responsibilities of U.S.-led occupation forces in Iraq.