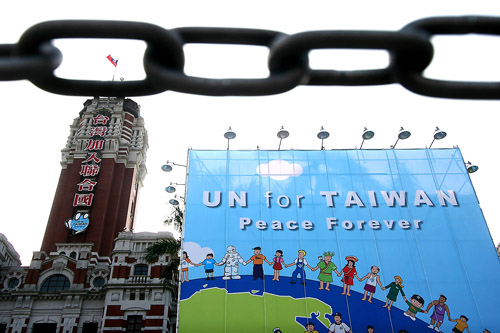 President Chen Shui-bian stated yesterday that Nicaraguan President Daniel Ortega "supported the referendum on whether Taiwan should apply for United Nations membership" and supported U.N. membership under the name of Taiwan.
During a news conference with foreign reporters in Nicaragua yesterday morning, shortly before his departure from Managua to return to Taiwan after the end of an eight-day "journey of great friendship," Chen related that Ortega had expressed in their meetings support for both the referendum sponsored by the Democratic Progressive Party on entering the U.N. and furthermore "supports Taiwan's entry into the United Nations under the name of Taiwan."
"We believe what President Ortega said openly and in his private commitments," said Chen, who added that the Sandinista leader was "a fighter for democracy and has a definite understanding of the struggle of the 23 million Taiwan people for democracy and freedom."
Chen related that Ortega had "specifically taken me aside and reminded me repeatedly that I must carefully promote this referendum and must use the name of Taiwan and not have any retreat whatsoever."
"We have only admiration and gratitude and no doubt whatsoever," Chen stated.
"This is not a retreat but progress," Chen said.
The Taiwan president said that Ortega mentioned domestic issues and related that he advocated reconciliation with the United States and with opposing political forces and expressed appreciation and affirmation of that position.
"The cross-strait problem is the same," said Chen. "We have always advocated that the cross-strait problem must have active dialogue and cooperation so as to promote lasting peace in the Taiwan Strait."
"In the past seven years, we offered at least 50 olive branches, but unfortunately we did not receive any goodwill responses from Beijing," Chen related.
"We believe a resolution to the Taiwan Strait problem must be based on the four principles of democracy, sovereignty, peace and parity, the acceptance of the status quo of Taiwan's sovereignty and accept the free choice of the Taiwan people," Chen declared.
"Of course, there can be no appeal to war or non-peaceful methods and the cross-strait problem can only be resolved through peaceful dialogue on an equal basis without any side seeing themselves as 'central' or 'local," Chen stated.
Asked about reports that Taiwanese companies with operations in Nicaraguan industrial zones had violated worker rights and the right to organize trade unions, the Taiwan president declared that "the rights of labor are naturally a part of human rights and are a universal value."
"The Taiwan government is very concerned with the human rights of workers and resolved to implement the rights of labor in Taiwan but also believes that Taiwan businesses abroad must respect the human rights of workers in their own factories abroad," Chen said.
"We believe that foreign workers in Taiwan should not be exploited and that likewise, Taiwan businesses abroad should not exploit the workers in the countries in which they operate," Chen said. "This universal value should not be implemented selectively or differently in any country."