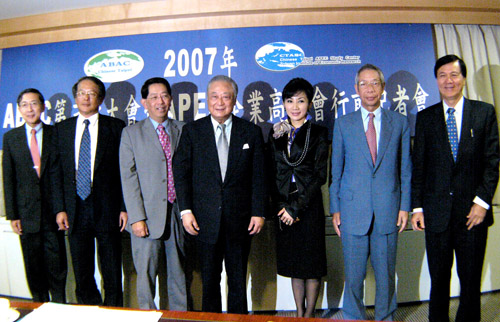 A total of ten Taiwan business leaders have been invited to take part in the APEC Australia 2007 Business Summit, previously known as the APEC CEO Summit, to be held September 6 to 7 in Sydney, alongside the annual meeting of APEC Economic Leaders.
Among the 10 business leaders invited to the event, I Mei Group Vice Chairman Kao Chih-shang, China trust Group Chairman Jeffrey Koo, and TECO Group Chairman Huang Mao-hsiung have represented Taiwan at the summits for many years.
The annual event provides opportunities for representatives of the APEC Business Advisory Council and other senior business leaders from the Asia-Pacific region to hear from APEC Economic Leaders, economists, policy makers and other business leaders about relevant economic and trade issues.
Among those who have been invited to the event for the first time are 101 Financial Center Chairperson Dianna Chen, Taiwan Semiconductor Manufacturing Co. Vice Chairman Tseng Fan-cheng, Formosa Plastic Group Vice President Wang Jui-hua, Taiwan Power Co. Board Chairman Chen Kui-min, Chinese Petroleum Corp. (Taiwan) Bard Chairman Pan Wen-yen, Polaris Securities President Pai Wen-cheng, and Taiwan Industrial Bank Lo Chin-ming.
Chen described her invitation to the event as a great honor, adding that she wished to take advantage of the opportunity to learn from other business leaders how to improve the management of the world's tallest building through better environmental protection measures and more efficient use of energy and other resources.
In 2006, the APEC CEO Summit was held in Hanoi, Vietnam from November 17 to 19. The event attracted high-level participation by economic and business figures, academics and the media, from across the Asia-Pacific region, with a total participation of close to 1200.