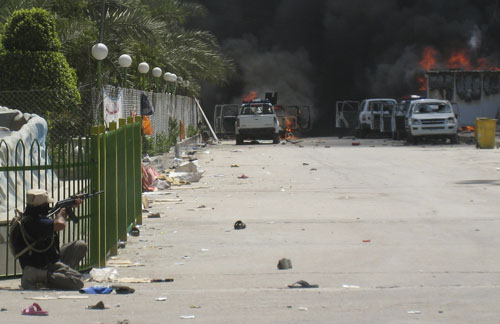 Authorities locked down access to the southern city of Karbala yesterday after fierce clashes between rival Shiite militias claimed more than 50 lives and forced an end to a massive religious festival. Security was heightened in other Shiite areas to prevent clashes from spreading.
Following two days of clashes, Iraqi Prime Minister Nouri al-Maliki, a Shiite, rushed to Karbala to meet with local officials trying to restore order and move the hordes of pilgrims who had descended on the city for the festival.
The Karbala office of al-Maliki's Dawa Party was firebombed during the melee.
Sporadic gunbattles raged yesterday near two shrines protected by the Badr Brigade, the armed wing of the Supreme Islamic Iraqi Council, although violence was tapering off.
Clashes began late Monday but escalated dramatically the following day when gunmen believed from the Mahdi Army militia of radical cleric Muqtada al-Sadr began firing on security forces and the Badr guards, according to security officials.
However, a spokesman for al-Sadr, Ahmed al-Shaibani, denied that the Mahdi Army was involved in the Karbala fighting.
Jockeying for position
Tensions have been rising in southern Iraq as rival Shiite groups maneuver for power, especially in the oil-rich area around Basra, Iraq's second-largest city.
The fighting forced authorities to cut short the annual Shabaniya festival, which drew an estimated 1 million people from across the Shiite world.
Despite an order to clear the city center, an al-Arabiya television correspondent reported there remained an "intensive deployment" of Mahdi Army men, waving guns in the air.
A Sadrist lawmaker, Hamed Kanoush, was detained by Iraqi security forces and members of al-Sadr's movement threatened to attack the governor's office if he was not released, according to a member of the Karbala Provincial Council, speaking on condition of anonymity out of security concerns.
The fighting claimed at least 52 killed and 300 others injured, according to the director general of the health department in nearby Najaf who spoke on condition of anonymity. Sixty wounded people were brought to a hospital in Najaf, 70 kilometers southeast of Karbala, because the hospitals in Karbala were unable to handle the volume of injuries, he said.
The defense ministry announced that al-Maliki had ordered the dismissal of the top army commander in the area - Major General Salih Khazaal al-Maliki - and an investigation into his conduct.
The prime minister's office said security forces had sealed the city off, allowing only residents to enter, in another effort to restore order.
Gunfights also broke out Tuesday between Mahdi militiamen and followers of the Supreme Council in at least two Shiite neighborhoods of Baghdad and in Kut, about 160 kilometers southeast of the capital, police said.
Yesterday authorities also imposed a curfew on the Shiite city of Hilla. Security forces also sealed off several Shiite areas of Baghdad.
The trouble started in Karbala late Monday as tens of thousands of Shiites were streaming into the city for Shabaniyah, marking the birth of Mohammed al-Mahdi, the 12th Shiite imam who disappeared in the 9th century. Devout Shiites believe he will return to Earth to restore peace and harmony.
Scuffles broke out between police and pilgrims as the crowd tried to push through the security checkpoints near the Imam al-Hussein mosque, the focal point of the celebrations. At least five people were killed, police said.
Early Tuesday, crowds of angry pilgrims chanting religious slogans surged through the streets, attacking police and mosque guards, witnesses said. Two ambulances were set ablaze, sending a huge column of black smoke over the city.
Gunmen appeared, firing automatic rifles, rocket-propelled grenades and mortars at security forces and sending panicked pilgrims fleeing the area, police and witnesses said.