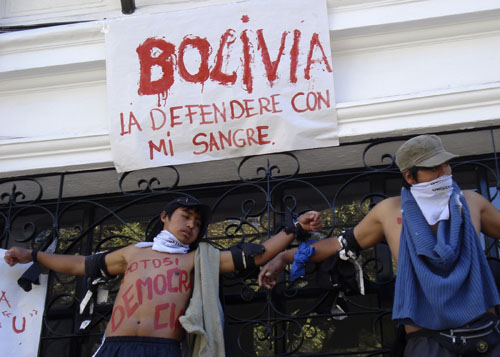 Scattered violence marked a 24-hour work stoppage by Bolivia's conservative opposition to protest Bolivian President Evo Morales' refusal to relocate the nation's capital and his move to prosecute four high-court justices.
The Tuesday strike against Morales was called in six of nine Bolivian provinces, with organizers asking businesses to close and residents to stay home from work, while halting some airplane and bus service.
Reports on the extent of the strike were mixed, but television images showed significant portions of four major cities shut down by the protest.
Bolivia's conservative opposition is backing a hotly debated proposal to relocate the executive and legislative branches from La Paz to the more centrally located but much smaller Sucre, the country's first capital and home to its highest courts.
Morales has refused to let the topic be discussed in an assembly convened in Sucre rewriting Bolivia's constitution - sparking protests in that city that have temporarily suspend assembly sessions.
The capital demand vents long-simmering frustrations with a Bolivian government long heavily centralized in La Paz, which is the country's largest urban area but located on its far western edge.
Opponents of the change warn shoehorning the government seat into the quiet colonial streets of Sucre would be a logistical nightmare.
Protesters were also angered by Morales' move to bring charges against four justices on Bolivia's highest court. The president alleges they overstepped their authority by temporarily suspending four of his judicial appointees earlier this year.
Before dawn Tuesday, a gang of anti-Morales youths looted a market in eastern city of Santa Cruz, an opposition stronghold, brandishing sticks and demanding that vendors keep their stalls shut in compliance with the strike.
Branko Marinkovic, president of the Santa Cruz Civic Committee, which led the protests, denied reports that looters had ties to the committee and declared the protests successful.
"We hope the government realizes that it has to listen to its citizens," he said.
Bolivia's Government Minister Alfredo Rada criticized the protests for sowing confrontation. "This is a strike in which violence is permanently present."