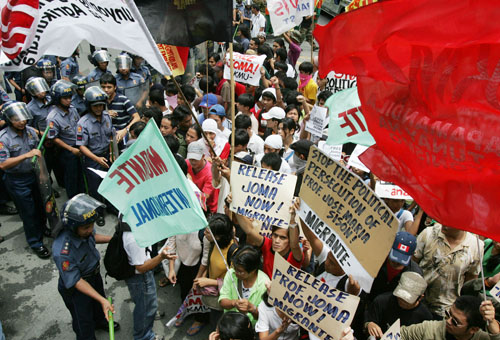 The Philippines braced yesterday for fallout from the arrest of a communist leader as his compatriots vowed to intensify their insurgency and leftist groups worried about the prospects of a more general crackdown and all-out war.
Jose Maria Sison, founder of the Communist Party of the Philippines and its armed wing, the New People's Army, was arrested Tuesday in the Netherlands for allegedly ordering the murders of two former allies in Manila.
Sison is accused of commanding a rebel uprising for more than 20 years from his home in exile.
Philippine President Gloria Macapagal Arroyo hailed the arrest as "a giant step toward peace. A victory for justice and the rule of law."
But the National Democratic Front, the Marxist umbrella, and other leftist groups condemned the arrest and raids on Sison's office and at least seven other addresses in the Netherlands. They claimed the actions were based on trumped-up charges fueled by fabricated evidence supplied by the Philippine government.
"This will result in an all-out war and lead to the end of peace negotiations," Renato Reyes, secretary-general of leftist group Bayan, told a news conference.
"The government is very eager to pursue its all-out war policy. There is always that possibility that they could escalate the repression also against legal organizations based in the Philippines."
On-and-off talks to end the 39-year-old insurgency have been stalled since 2004. The rebels, considered the country's most serious threat, have continued to carry out attacks, mostly on security forces and infrastructure.
Police kept about 200 protesters from approaching the Dutch Embassy in Manila, where leftist groups promised to stage a mass demonstration today. Rallies also were planned in six other countries, they said.
"Certainly, the struggle of the people in the countryside and cities will intensify," NDF chairman Luis Jalandoni told Philippine radio station DZBB in an interview from the Netherlands.
"Rather than annihilating the revolution, what happened will just add fire to the revolutionary movement in the Philippines," said Representative Crispin Beltran of the leftist Anakpawis party.
Jesus Dureza, Arroyo's adviser on the peace process, said word of the arrest came during a Cabinet security meeting.
"I'm sure the security forces are taking the appropriate measures," Dureza said.
Sison claims he no longer has an operational role in the insurgency. In a 2002 interview, Sison said he had "no weapon but my tongue."
But the military believes he continues to be its overall leader, often writing revolutionary treatises under the pseudonym Armando Liwanag.
Dutch prosecutors said Sison, 68, will be put on trial there for allegedly ordering the killings of Romulo Kintanar and Arturo Tabara in suburban Manila.
Kintanar was shot in a Japanese restaurant on January 23, 2003. Tabara was killed, along with his son-in-law, in a parking lot as they got out of their car on September 26, 2004. The NPA claimed responsibility for the slayings.
Kintanar was commander of the New People's Army when it created a special unit that assassinated U.S. Army Colonel James Nicolas Rowe of the Joint U.S. Military Assistance Group in 1989.
However, he later fell out with the communist leadership. The NPA said it killed him for various crimes against the people and the revolution, including the 1986 kidnapping of Japanese businessman Nobuyi Wakaoji, which he reportedly kept secret from top communist leaders.
The communist rebels said Tabara pulled a gun on a group of rebels as they tried to "arrest" him for so-called counterrevolutionary activities, including the murder of an elderly peasant leader and a bank holdup in which four employees were killed in 2002.
For years, Sison has fought a legal battle to stay in the Netherlands as a refugee, but repeatedly has had all his requests for asylum rejected.