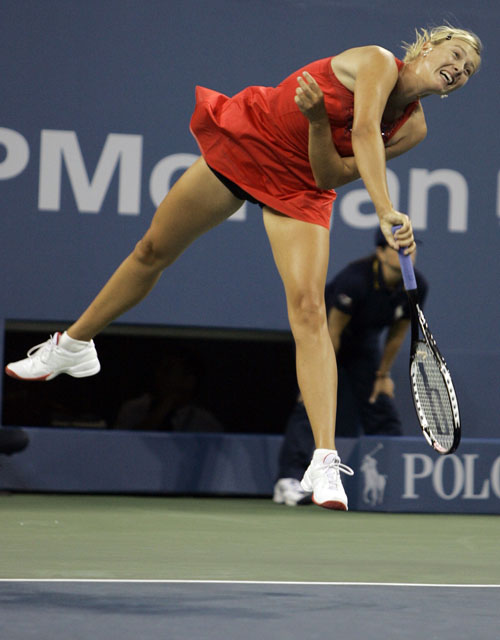 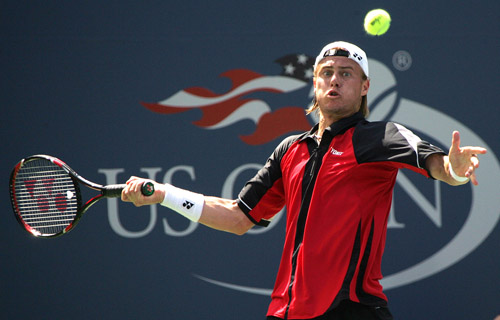 Defending U.S. Open champion Maria Sharapova showed up on center court Tuesday evening in a bejeweled candy-red dress and a sequined purse, as if heading to a Manhattan cocktail party. She played like she was in a hurry to get there, taking just 50 minutes to overpower Roberta Vinci of Italy, 6-0, 6-1.
The red shift, replacing last year's Audrey Hepburn-inspired "little black dress," was adorned with 600 Swarovski crystals, symbolic of the Big Apple's sparkling skyline. Sharapova said she rushed through her warm-up and cut it a little short because she "couldn't wait" to get into the dress.
"When you feel good about what you're wearing, you know what that's like, put on a nice outfit and some makeup and you're the bomb," she said, smiling. "I've never worn red before. There's no better place to do it than a night match in New York."
She certainly played like the bomb against Vinci, who didn't hit a winner until the 11th game of the match and had just three winners to Sharapova's 30.
Vinci lost the first 11 games, and finally erupted with joy when she made it 6-0, 5-1 to avoid the shutout. She leaped in the air and double-pumped her fist.
"I win one game, I'm happy," said the 51st-ranked Vinci. "Six-love, six-love? No. Six-love, six-one? OK."
Sharapova is hungry to defend her title, particularly because she has struggled at major tournaments this year. She was blown out 6-1, 6-2 by Serena Williams in the Australian Open final and lost even worse to Williams in Key Biscayne (6-1, 6-1). She lost 6-2, 6-1 in the French Open semis to Ana Ivanovic. and was eliminated by eventual champion Venus Williams in the fourth round of Wimbledon 6-1, 6-3.
One reason for her troubles was an injured right shoulder. She changed her serving motion after Wimbledon to try to compensate for the problem and avoid further injury.
"I adjusted the weight of my racket a little bit, changed the serve and made it a little shorter," she explained. "My old swing used to be dramatically long."
Despite her tough losses this year, Sharapova believes she can pull it together over the next 10 days on the court that she said still gives her goose bumps.
"I know how sweet it was to win last year. No matter how good or bad this year has been, I want to have that same feeling again. I know what I'm capable of doing when I'm healthy. I know how I can play and how tough I am, and I know I can win it again."
Sharapova was joined in the second round by four other former U.S. Open champions - Svetlana Kuznetsova, Martina Hingis, Andy Roddick and Lleyton Hewitt. Hewitt, who won his title at Flushing Meadows in 2001, feels there will be another title down the road as a reward for his always-churning legs and his zipping groundstrokes.
"I believe that, yeah, it's in me, that's for sure. I think I'm good enough," Hewitt said after easing past Amer Delic of the United States 6-2, 6-4, 6-2. "That's what my goal is. That's what you keep striving toward, working for. Hopefully it will be around the corner."
Said Delic: "I mean, the guy's good."
Blake agreed, saying: "Lleyton is playing some of the best tennis in the world right now. He's got to be in the top five contenders for this title."