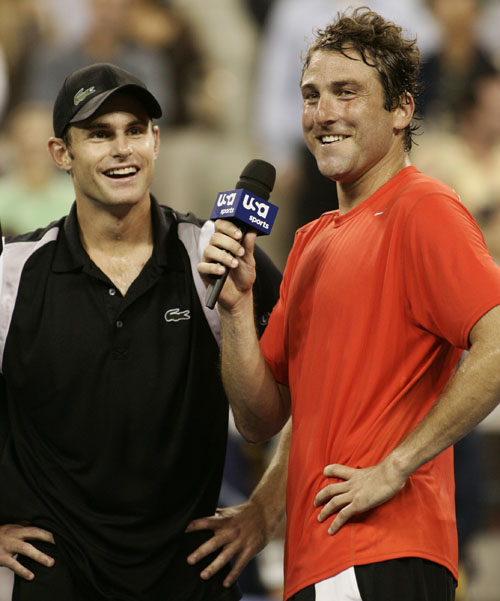 Laughing on his way out the door, Justin Gimelstob said goodbye to the U.S. Open and hello to a future TV career all at once Tuesday night.
The 30-year-old American is retiring after a 12-year run in professional tennis that included two Grand Slam mixed doubles titles with Venus Williams - and nowhere near that sort of success in singles.
Still, he's quite a character, which was on full display both during and after his 7-6 (6), 6-3, 6-3 loss to 2003 U.S. Open champion Andy Roddick in the first round.
"Obviously, I would have liked to have done better," said Gimelstob, never past the third round in singles at a major, "but I'm fine with leaving the game."
The high point?
"Just a lot of averageness," he responded.
After a bit of thought, Gimelstob added: "One record I have is that I'm 5-0 in five-set matches at the U.S. Open. I'm proud of that, considering that I usually cramp in the second."
When this three-set match ended, the pals met at the net for a hug, and Gimelstob then kneeled down to kiss the blue court at Arthur Ashe Stadium. Then he and Roddick held court, grabbing a microphone to interview each other and joke around for the benefit of the sellout crowd in the stands and TV viewers.
'Key to the match'
"What do you think was the key to the match" - Gimelstob asked Roddick, pausing for effect - "besides you being way better than me?"
Roddick then asked what Gimelstob will miss the most when he leaves tennis for good.
"That feeling walking onto center court. You don't get that in the real world," Gimelstob replied. "We kind of live in a fantasy world."
Then the pair held an unheard-of joint news conference, the winner and the loser, the former No. 1 and the guy who's never been higher than No. 63 and is currently No. 475.
"With the both of us sitting here," Gimelstob said, "what were the odds I would get the first two questions?"
They entertained the fans with a bit of levity in the second set. Gimelstob argued good-naturedly with the chair umpire about whether he should have a first serve or a second serve after fans interrupted play by applauding a group of military members who got up to leave. After a lengthy delay, Gimelstob wound up double-faulting.
"You go on for an hour," Roddick shouted, "then you do that?"
'Good kisser'
Other than a tight first set - Gimelstob actually led 5-3 in the tiebreaker - Roddick eventually took complete control. Roddick wound up with 17 aces and a 59-38 edge in winners.
Afterward, Roddick was asked to describe his opponent and buddy. Gimelstob chimed in: "Sexy. Good kisser."
Turning serious for a moment, Roddick said: "At the heart of it all, one of the things that we can all respect - even though he's about as self-deprecating as one can get - is he went about things the right way."