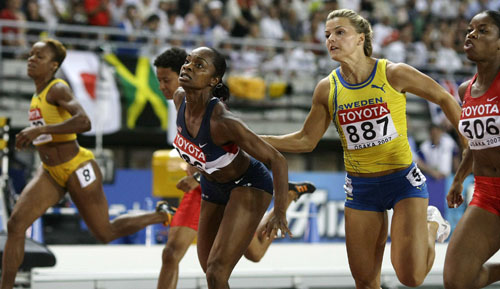 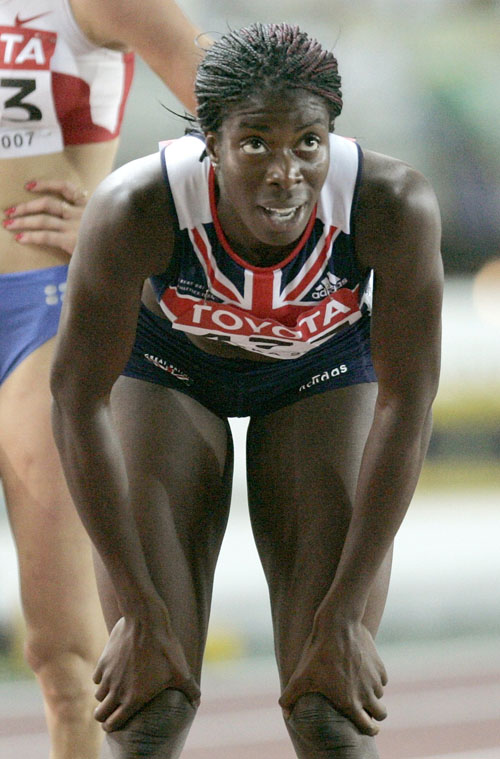 Perhaps breaking a leg was the best possible career move for Michelle Perry. Becoming a U.S. citizen didn't hurt Bernard Lagat either.
When Perry stood atop the 100 hurdles victory podium listening to the Star Spangled Banner, Kenyan-born Lagat interrupted his 1,500 victory lap to turn to the flag, hold his hand to his heart and make it an impromptu double victory ceremony.
Minutes earlier Lagat was in a seemingly bad position off the final bend but produced the kick of his life to end a career of minor-medal finishes for Kenya and become a world champion.
Over the final meters, he overtook former countrymen and held off defending champion Rashid Ramzi of Bahrain to finish in 3 minutes 34.77. Behind Ramzi, Kenya's Shedrack Kibet Korir took bronze.
Perry took her second straight world title in the 100-meter hurdles on yesterday, 14 years after a freak accident forced her to quit soccer. Her gold reinforced the United States atop the medal table.
Perry had to dig deep for victory, making the difference only after the last hurdle with a desperate lunge at the line.
"It was amazing for the first 60 (meters) and a fight to the end," she said. "I came off the 10th hurdle and pressed to the finish and pulled it out."
Her time of 12.46 seconds held off 2003 champion Perdita Felicien of Canada by .03 seconds. In a tight finish, Delloreen Ennis-London of Jamaica was third in 12.50.
It continued her dominating season. Perry is one of three athletes still in the running for the US$1 million Golden League jackpot, rewarding the athletes who remain perfect in the world's six biggest one-day meets.
On an evening of career reversals, Christine Ohuruogu won the 400 only weeks after ending a one-year suspension for missing three doping tests. Ohuruogu came back stronger than ever, clawing back over the last 20 meters to sweep past Jamaican Novlene Williams and dragging Nicola Sanders in her wake to silver for a 1-2 British finish.
The British athletics federation said Ohuruogu's violation was due to forgetfulness. The 23-year-old is also appealing a British lifetime ban from the Olympics.
"At this time last year I was in complete turmoil. I didn't know what I was doing," Ohuruogu said. "It hasn't quite sunk in yet. I'm just happy that I've worked hard and everything has come together at the right time."
With Perry and Lagat's titles, the United States moved to five golds and 10 medals overall, keeping clear of Russia, which has 3 gold and 9 in total.
Defending champion Franka Dietzsch at the age of 39 gave Germany its first gold when she beat Russia's Darya Pishchalnikova and Cuba's Yarelis Barrios in the discus. Dietzsch also won the title in 1999.
The Bahamas' Donald Thomas was the surprise winner of the men's world high jump gold yesterday in a fairytale end to the event.
Thomas, a breakthrough athlete who is only in his second year of serious competition, stunned Nagai Stadium by clearing 2.35 meters on his first attempt, equaling the best jump this year.
The leap was to prove decisive as Thomas, 23, took gold due to his inferior number of attempts ahead of Russia's 2005 silver medalist Yaroslav Rybakov and Kyriakos Ioannou of Cyprus.