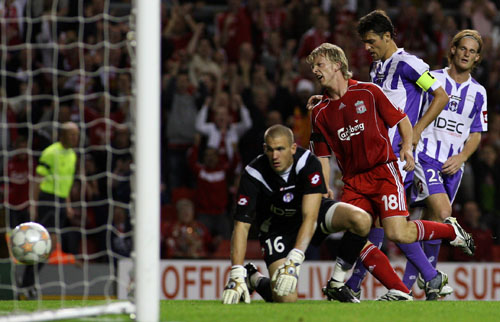 Rafael Benitez saluted Peter Crouch as the striker gave him a timely reminder of his quality during the 4-0 Champions League win over Toulouse.
Crouch has spoken of his frustration after failing to make the starting lineup in Liverpool's first three Premiership games - despite scoring 24 times for club and country last season.
But Crouch opened his account for the season as Benitez's side crushed Toulouse 5-0 on aggregate on Tuesday to qualify for the group stages of the Champions League.
The 26-year-old striker now has eight goals in his last 10 starts in the competition, which should help his cause as he tries to persuade Benitez and England coach Steve McClaren that he is worthy of a place in their teams.
Crouch is suspended for the match against Israel in September but is available for the crunch game with Russia four days later as England's hopes of qualifying for next year's European Championship finals hang in the balance.
Benitez said his goal against Toulouse would give the seven million pounds signing from Southampton a huge confidence boost with McClaren due to name his squad at the end of the week.
"Crouch scored a good goal and had three more chances. He will have more confidence after that goal."
Crouch set Liverpool on its way to one of their easiest European wins in recent times after poking home a 19th minute cross by Dirk Kuyt to leave Toulouse with a mountain to climb.
Sami Hyypia's first Champions League goal in two-and-a-half-years - a 49th minute header - killed off the visitors for good before Kuyt scored twice in the last three minutes to complete a satisfying night for the host.
What must have pleased Benitez on Tuesday was that victory was achieved without key players Steven Gerrard and Jamie Carragher. Gerrard missed his second game with a badly damaged toe while Carragher is nursing a rib injury.