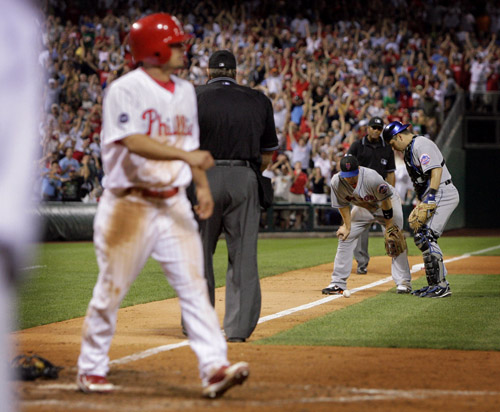 It was a tale of two hits, two hits that might make a big difference in the Philadelphia Phillies' season.
One traveled a mere 40 feet and came to rest an inch or so from the third-base line.
The other rocketed through the air and covered an estimated 396 feet before landing amid the delirious denizens of the left-field seats.
Both hits, the dink and the drive, helped the Phillies pull off what might have been the win of the season on Tuesday night at Citizens Bank Park, a 4-2 come-from-behind victory over the National League East-leading New York Mets.
The Phillies won it in the bottom of the 10th on Ryan Howard's 35th homer, a two-run shot to the opposite field.
"When he hit it, everyone in the dugout just went nuts," said Brett Myers, who picked up the win with two scoreless innings of relief. "It's amazing. This team has a lot of heart. We keep fighting until the last out."
Howard, who was greeted at home plate by his celebrating teammates, was also pretty excited about the homer. As the ball sailed through the air, he took a few strides out of the batter's box, turned to the dugout, and shouted in triumph.
"It was definitely huge," Howard said of the game-winning homer, which came on a 1-2 fastball from Guillermo Mota. "More so for the team and the way we fought in this game. It was just a great game."
The victory pulled the Phils to within four games of the Mets in the NL East with two games left in the series. The Phils have won the first two.
Mets lefty Tom Glavine, who became baseball's 23d 300-game winner earlier this month, blanked the Phils for seven innings and left with a 2-0 lead.
When Glavine exited, the Phils' bats came alive in the eighth. Jimmy Rollins turned the momentum with a solo homer off Pedro Feliciano. Pat Burrell walked with one out and was replaced by pinch-runner Shane Victorino, who stole second and went to third when catcher Paul Lo Duca's throw went into center field.
With two outs, Aaron Rowand batted against Aaron Heilman. Rowand hit a nubber up the third-base line. The ball played footsie with the line and eventually stopped in fair territory, 40 feet from home plate. As Mets players waited to see if the ball would be fair or foul, Victorino scampered home with the tying run and Rowand, standing at first, blew him a kiss.
In other National League action: Pittsburgh 6, Cincinnati 4, 1st game; Pittsburgh 3, Cincinnati 2, 2nd game; Florida 4, Atlanta 3, 11 innings; Chicago Cubs 5, Milwaukee 3; St. Louis 7, Houston 0; San Diego 6, Arizona 4; LA Dodgers 4, Washington 3; San Francisco 3, Colorado 1
Damon rocks old team
Johnny Damon hit a tiebreaking homer against his former team and Andy Pettitte won his sixth straight start, halting another Yankees slide in New York's 5-3 victory over the Boston Red Sox on Tuesday.
Derek Jeter also homered and Jorge Posada hit an RBI double for the Yankees, who moved to seven games back of Boston in the American League East.
Pettitte (12-7) allowed three runs and six hits in seven innings, improving to 8-1 in 10 starts since the All-Star break.
In other American League action: Cleveland 6, Minnesota 5; Tampa Bay 15, Baltimore 8; Kansas City 6, Detroit 3; Texas 4, Chicago White Sox 3; Toronto 5, Oakland 4; LA Angels 10, Seattle 6.