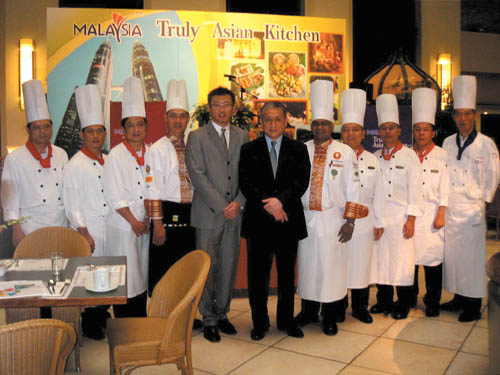 The Malaysia Truly Asian Kitchen is a festival promoting the traditional Malaysia food, being held at Sunworld Dynasty Hotel Taipei.
"The event, launched since June, is dedicated to the 50th anniversary of Malaysia's independence, and is mainly organized by the Malaysia Tourism, Malaysia Airlines, Malaysia Friendship and Trade Center, and us." says the general manager of Sunworld Dynasty Hotel Taipei, Victor Chou.
Right next to Victor in the picture are the senior chefs in Malaysia - Andy and Murugan, who are invited to the hotel to showcase the traditional cuisine. Both Andy and Murugan are active members of the Chefs Association of Malaysia, Penang Chapter. Andy is specialized in his unique modern cuisine and is the well-known winner of many cooking competitions. Meanwhile, chef Murugan is the expert of Indian cuisine, serving many VIP patrons, such as the highest king and the prime minister of Malaysia. "The delicate Malay cuisine is all about its spice. The unique taste of Malay cooking is all about sweet, sour and then spicy," says Chef Andy.
During the festival, which will run until September 2, the traditional Malaysia food, band and dance will be present at Sunworld Dynasty Hotel Taipei, which only cost NT$560+10% for lunch, NT$380+10% for afternoon tea and NT$750+10% for dinner.
Other promotions come with the festival, running till August 31st includes "Come Three Get One Free", complimentary afternoon tea voucher for one person will be given when consuming more than NT$5,000 within a month, and other big prices such as exquisite cake, special wine package and round way ticket from Taipei to Malaysia and so on. Enjoy your summer at Sunworld Dynasty Hotel Taipei.
Monday-Friday
Buffet Lunch: NT$560+10% per person
Afternoon Tea: NT$380+10% per person
Buffet Dinner: NT$680+10%per person
Saturday-Sunday
Buffet Lunch: NT$650+10% per person
Afternoon Tea:NT$480+10% per person
Buffet Dinner: NT$750+10%per person
For reservations call (02)2715-0077 ext: 3310-3311.