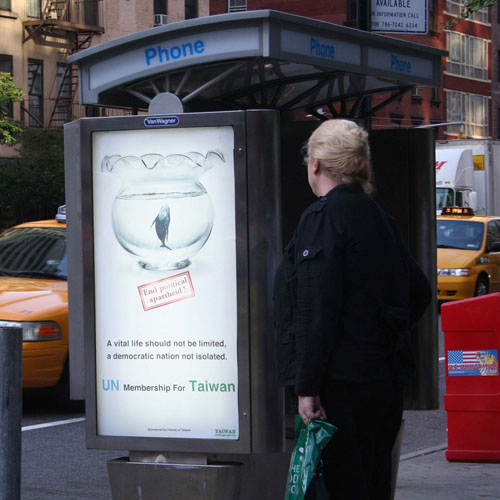 Taiwan Foreign Minister James Huang (黃志芳) yesterday expressed "deep regret" over a reported statement by United States Deputy Secretary of State John Negroponte to Hong Kong media indicating that Washington "opposed" the proposed referendum on whether Taiwan should apply for United Nations membership under the name of "Taiwan" as "a step toward a declaration of independence."
The Broadcasting Corp. of China, which is now owned by former New Party Legislator and UFO Radio Network Chairman Jao Shao-kang, reported yesterday that Negroponte had told a Hong Kong television station in an exclusive interview that the United States believes the promotion of a referendum on entering the U.N. was a step toward declaring independence and was not a suitable measure by the Taiwan authorities for the sake of pursuing Taiwan's own interests."
According to the BCC, Negroponte told the Hong Kong television station that the United States "opposes" the referendum to enter the United Nations and expressed Washington's hope that the Taiwan leaders would display a responsible style and avoid harming the interests of the Taiwan people.
"I believe that a referendum is our country's internal affair," said the Taiwan foreign minister, adding that "referendum is a core democratic value and is also the most democratic and most peaceful way for the people to express their views."
The foreign minister stated that the referendum promoted by the Democratic Progressive Party "does not transgress the 'four noes' commitment of President Chen Shui-bian (陳水扁) and would not change the status quo."
Huang observed that both the governing Democratic Progressive Party and the main opposition Kuomintang are promoting petition campaigns to put on the ballot U.N. related referendums.
These proposed referendums would be on Taiwan's "entry" into the U.N. or the "return" of the Republic of China into the U.N., respectively, if they attain the high thresholds for such petitions.
"Despite the small difference between these two referendums, it is clear that there is a consensus in our society in favor of a referendum on our application to join the U.N. and that the issue of such a referendum is no longer a matter of a single political party or a single leader," Huang commented.
"The referendum on entering the U.N. would let the people of Taiwan have a chance to directly express Taiwan's rational and humble desire to enter the United Nations, would not transgress President Chen's 'four noes' and is unrelated to any changes in the status quo," said Huang.
"Therefore, we believe that the interpretation by the U.S. deputy secretary of state is not correct and we express our regret over it."
In addition, Huang stated that Chen had realized the most important objectives of the eight-day "journey of great friendship."
Huang said the visit, which featured a summit in Honduras with Taiwan and six Central American and Caribbean allies, and state visits to Honduras, El Salvador and Nicaragua, had succeeded in consolidating Taiwan's ties in the region in the wake of the recent decision by Costa Rica, a diplomatic partner of over 60 years, to break ties with Taipei and recognize the People's Republic of China.
"Just over two months after Costa Rica broke ties with us, President Chen Shui-bian personally participated in a summit with our Central American allies and the Dominican Republic and all six countries, during the summit and at a news conference after, affirmed their firm support to retain formal diplomatic ties with Taiwan," Huang said.
In addition, the summit provided an opportunity to reexamine multilateral and bilateral programs of cooperation with Belize, El Salvador, Guatemala, Honduras and Nicaragua as well as the Dominican Republic.