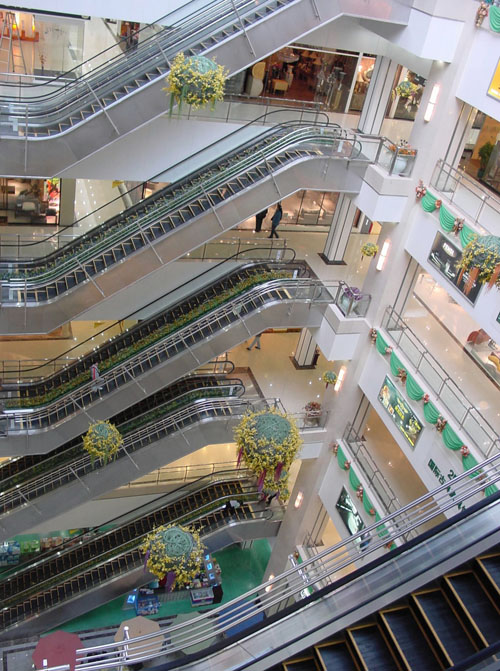 For a closer look at China's sizzling economy, walk the marble floors of Beijing's latest luxury mall. From its Japanese-style food court selling US$4 chocolate eclairs to its glittering floors of branded international fashion, Shin Kong Place is a palace of conspicuous consumption.
The only thing missing, on a sizzling summer afternoon, was customers. Sales staff idled at display racks as a trickle of young visitors looped around the frigid mall. Most were content to window-shop, dreaming of the day when they could afford to drop US$100 on a tassled tote bag. "These prices are too expensive. People can't afford it," says Xu Tao, a car repairman who was visiting with his girlfriend.
As investors continue to pour money into malls, analysts say the signs of a real estate bubble are growing, as are predictions that some retailers may be heading for trouble. Empty malls are just one indicator of an overheating economy - growing at its fastest clip in over a decade - that is proving hard to cool.
To curb rising inflation, led by food prices, China's central bank raised interest rates last week for the fourth time this year. Real estate is also in the spotlight: Property companies were ordered in June not to borrow offshore. But the race to build goes on.
"The problems of overheating are already apparent," says Wang Yao, director of the information department for the China General Chamber of Commerce, an industry umbrella group. "The commercial real estate industry is facing problems. After some buildings are finished, nobody wants to rent space."
Too many malls
Since 2002, China has built hundreds of malls in towns and cities, each trying to get a slice of a retail pie worth US$800 billion last year. Captivated by the promise of a vast consumer class itching to spend, foreign brands have jostled for space at the table only to find a scarcity of customers. As a result, retail occupancy rates in Beijing are currently 8 percent and rising as more malls enter a crowded market.
Xu, who pulls in US$266 a month - below Beijing's US$400 average - is typical. He socks away one-fourth of his pay packet, as does Chen Ping, his girlfriend, who makes a similar wage as a store assistant. Asked if he isn't tempted to save less and spend more, he shakes his head.
"If we enjoy life now, what about the future? We need to think of our future," he says.
The rising cost of living is one reason why many here are reluctant to splurge in fancy malls. Unlike U.S. consumers, many of whom use credit liberally, Chinese workers opt to save, knowing that a feeble welfare system is unlikely to provide for them.
As a result, consumption accounts for only 37 percent of China's economic output, about half the rate in the U.S.
Such stinginess bodes poorly for Beijing's mall developers.
Competition
When it opened in 2004, Golden Resources Shopping Mall was the world's largest shopping center, with 550,000 square meters of retail space (a new mall in southern China has since taken this title). But it has struggled to generate enough customer traffic and sales to justify an investment of nearly US$500 million and is fast being overshadowed by newer, glitzier retailers. An additional 2 million square meters of new retail space will be added this year, according to Mall China Information Center, an industry association.
"The question is not whether people can afford [luxury] products, but how many big malls that a city like Beijing should have. That's the issue. If there's too many malls, some will fail," says Wang.
It's a common problem that points up the inexperience of mall operators and the readiness of China's state-run banks to lend to prestige projects with political backing, say analysts and industry sources.
"I think that the issue is not that we've misjudged consumption. It's just been too easy to borrow money and build these things," says Michael Pettis, a finance professor at Tsinghua University in Beijing.
Just as U.S. home loan woes have left a nasty aftertaste, Pettis warns that a real estate downturn in China would saddle banks with dud loans to empty malls. In recent years, policymakers have cautioned banks against excessive lending to malls, to little avail.
Exports still rule
At the same time, authorities have long sought to lessen China's dependence on exports by stimulating domestic spending. But private consumption still lags far behind investment in real estate and factories, fueled by a hoard of savings in state-run banks.
New bank loans reached US$364 billion in the first seven months of this year, exceeding last year's total lending, state media reported. Property remains a favorite bet: housing in Beijing is fetching 10 percent more than last year.
However, industry sources say that many first-time mall operators aren't borrowing money but reinvesting profits from their other businesses. That's one reason why they don't always make the smartest decisions, says Victor Guo, president of the Mall China Information Center.
"The developers aren't so professional in China; they don't know how to develop and market their product. The industry is at an early stage," he says.
Golden Resources has adjusted its mix of stores to increase sales turnover, says Fu Yuehong, general manager of New Yansha Group, which operates part of the mall. Weekend crowds swell to 100,000, she says, though it's much quieter on weekdays.
One blind spot in China's real estate sector is the focus on well-heeled elites who can afford to pay top dollar for imported luxuries, such as the US$6,000 fur-trimmed leather jacket on sale last week at Shin Kong Place. Developers are neglecting the vast ranks of middle-income families in Beijing and provincial cities that aspire to a better lifestyle.
The reason may be less economics than vanity. "Every developer wants Louis Vuitton and Prada in their retail space. They don't want a mid-market project," says Anna Kalifa, head of research in Beijing for Jones Lang LaSalle, a real estate company.