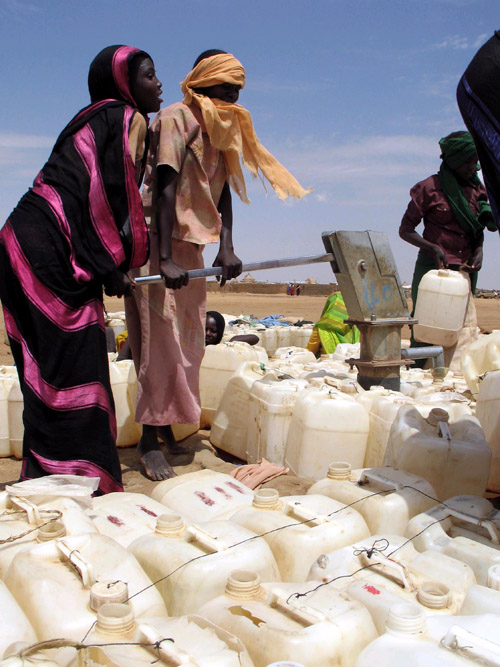 Everywhere you look in this expansive refugee settlement, mud-brick walls rise from the dusty earth, row upon row, like a bleak suburban housing complex stretching to the horizon.
The demand for bricks has been a bonanza for many of the 54,000 people who've settled here after fleeing the four-year war in Sudan's western Darfur region. "Selling these is the only way I can earn money," said Halima Mohammed Ghazi, a mother of three, as she laid out a batch of wet bricks under a scorching sun one recent afternoon.
But making bricks requires vast quantities of water, and that's placed a huge strain on a region already parched by years of drought and diminishing rainfall.
In recent months, nine of the boreholes that refugees rely on for water have run dry near Abu Shouk, one of the largest camps in northern Darfur. Now humanitarian officials warn that the refugee crisis has badly overtaxed water supplies in parts of Darfur, and shortages in some areas could imperil the health of tens of thousands of people.
"Livelihoods that are thriving in the context of the crisis, such as brick-making and charcoal-making, are placing unsustainable demands on natural resources," the British charity Tearfund concluded in a recent report.
As the population of camps continues to rise - to 2.2 million in July, 140,000 more than at the start of the year - aid workers in northern Darfur, where conditions are driest, are scrambling to find new sources of water and urging refugees to conserve supplies.
Complications
United Nations officials in Sudan say the shortages could complicate the deployment of 20,000 peacekeeping troops, authorized last month by the U.N. Security Council and seen by many as the best chance yet to end a conflict that's thought to have claimed anywhere from 200,000 to 400,000 lives.
U.N. planners who've been studying the problem for months still aren't sure how to provide enough water for so many peacekeepers in such an inhospitable environment, U.N. officials said. By agreement, the current 7,000-strong African Union peacekeeping mission shares water with the relief effort, but that arrangement seems unlikely to last as the camps grow and the larger peacekeeping mission arrives.
"Not having any clear vision of when exactly the population will be able to go back to their homes, there is no question that the water needs are going to increase," said Antoine Gerard, the head of Darfur operations for the U.N. Office for the Coordination of Humanitarian Affairs. "The arrival of several thousand (peacekeepers) only adds to that."
A Texas-sized region of mostly arid scrubland at the southern edge of the Sahara, Darfur has suffered for decades from a lack of water and a near-total absence of infrastructure.
Many experts trace the origins of the current conflict - pitting rebels from Darfur's non-Arab tribes against Arab militias backed by Sudan's government - to competition between farmers and nomadic livestock-herders over water and arable land, both of which have been disappearing.
Since 2003, hundreds of thousands of villagers have fled their homes and clustered near large towns such as El-Fasher, the capital of North Darfur state, where more than 145,000 people now live in Abu Shouk and two other nearby camps. The new arrivals have increased El-Fasher's population by more than half.
Declining annual rainfall
Meanwhile, the area is getting drier. Average annual rainfall has declined by one-third over the past 80 years, according to government statistics.
Worse, much of Darfur lies on what geologists call a basement complex, a formation of igneous rock that doesn't hold water well, so the store of water in bore wells, the major source of drinking water in the camps, doesn't get replenished.
"It's certainly an indication that water levels are declining," said St. John Day, the water and sanitation coordinator for the British charity Oxfam, based in El-Fasher.
American geologists who rediscovered a large, ancient lake deep underground in the far north of El-Fasher last month said tapping into it could help solve the region's water shortage. But other experts are skeptical. Some scientists think the lake has dried up, and many Darfurians doubt that the Sudanese government is willing to invest in such a project.
Looking at alternatives
Relief agencies are exploring other ways to supply water, such as harvesting rainfall and building or repairing dams. Tanker trucks have been bringing water to one large camp in southern Darfur for two months, an expensive and risky alternative on roadways often ruled by bandits.
They're also trying to convince people to conserve. But the water supply is a highly sensitive issue for Darfurians, who see it as a source not only of sustenance but also of commerce.
In her hut in Abu Shouk, Ghazi proudly displayed a hunk of goat meat her husband had purchased in El-Fasher with a few dollars that the family had earned from selling bricks.
Making one brick can require up to a quart of water, Day said. Relief workers say they can't force people to stop the practice.
"It's an ongoing crisis with no end in sight," Day said. "They're using their own initiative and doing what they have to."