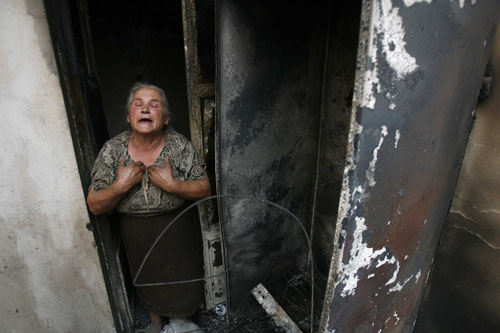 Greek firefighters backed by EU teams battled raging forest blazes that have killed 63 people and opposition parties accused the government of incompetence in handling the crisis.
Helicopters have winched trapped people out of blazing hamlets, impossible to reach by land, and EU allies joined Greek fire crews in the struggle to stop the flames reaching more towns and villages across the country.
The opposition Socialist PASOK party poured scorn on the government's efforts and said accusations of arson were an excuse for its own weaknesses - making the handling of the fires an election issue three weeks before a snap poll.
"This government was proven to be totally incompetent, unable to handle the fire crisis, like all the other crises it encountered in its four-year administration," PASOK leader George Papandreou said on Monday.
Some 2,000 leftist protesters marched through Athens to parliament, shouting "down with the government." Press headlines and distraught villagers criticized the pace of rescue efforts.
Greek Prime Minister Costas Karamanlis's government reacted to accusations that it had failed to act quickly to stop the fires - stretching from the southern Peloponnese to Athens and the northern town of Ioannina - by blaming them on arsonists.
In the Peloponnese, a popular tourist destination, plumes of black smoke poured from burning pine forests and olive groves, turning the sun dark red and sometimes blotting it out.
Zakharo, a town in the western Peloponnese, was hard hit, the coastal forest that was part of its attraction now a smouldering lunar landscape.
"We were left to die because for days we did not have any help," said farmer Takis Theodorakopoulos, 63, sitting in a Zakharo cafe. .".. in the end we were left with this," he said, pointing to blackened tree trunks. "How do you rebuild that?"
Panagiotis Panagopoulos, who lost his mother and sister in the flames, asked: "What is there to do now? My life has been turned upside down ... We stood in awe as the flames rose to tens of meters and just scorched everything."
Election as planned
Roussopoulos promised that the parliamentary election would be held "absolutely on schedule" on September 16, adding that the government would become "the mother and father of every victim" and help those whose homes had been destroyed.
The government has offered rewards of up to 1 million euros (US$1.4 million) for help in tracking down arsonists who it believes played a major role in starting the fires, now in their fifth day.
Many local mayors have accused rogue land developers of setting fires to make way for new construction. Three elderly people and two boys have been charged with starting fires.
The fires covered Athens in white ash that swirled around the temples of the Acropolis. The smell of smoke permeated the city and flags flew at half mast.
The declaration of a nationwide state of emergency and appeals for help have brought planes and firefighters from abroad, and more outside help is expected soon.
On Sunday firefighters won a battle to save Olympia, birthplace of the Olympic Games in the Peloponnese peninsula, beating back fires menacing the ancient stadiums and temples.