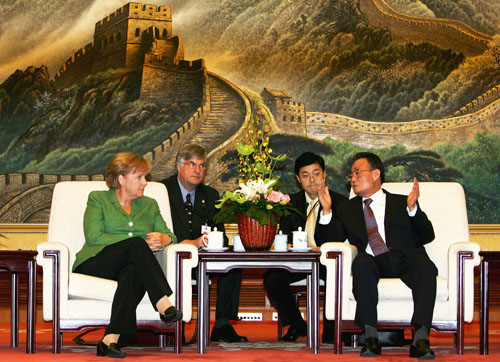 German Chancellor Angela Merkel yesterday pressed China to improve human rights and take on greater international responsibilities as its global influence grows.
In a speech to Chinese researchers, Merkel said she welcomed China's economic development and rising participation in international affairs, but she also urged Beijing to give citizens a greater say.
"Human rights are of very high importance to us," Merkel said, adding that rights needed to include freedom of religion, press and expression.
"Nobody has the right to put himself above others ... human dignity cannot be divided."
China has been criticized by many in the West for its treatment of journalists, minority and religious groups, a subject that has gained weight in the run-up to the Beijing Olympic Games next year.
Merkel in the morning met a group of Chinese journalists, including one who had been dismissed from a state-run newspaper for decrying censorship.
Merkel said that international attention on China was sure to grow in the lead-up to the Olympics.
"The world will be watching China more intensely than ever before," she said.
She urged China to continue pressing Sudan to help create peace in Darfur and restated the German position that all countries needed to work together to halt climate change.