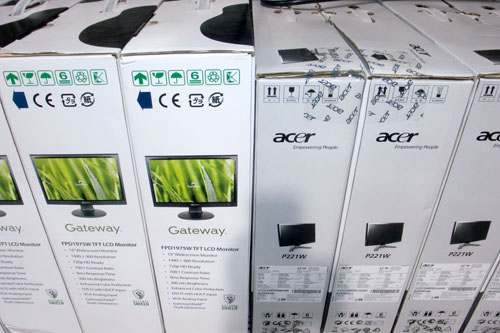 Wary investors yesterday snubbed plans by Taiwanese computer vendor Acer to boost its global presence through a friendly takeover of U.S.-based Gateway, sending the company's stock tumbling 7.0 percent.
Dealers said investors feared Acer was paying too much for Gateway in its 1.90 dollar a share offer which values the group at US$710 million and represents a 57 percent premium over Gateway's closing level on Friday.
"This reflects prevailing concerns among foreign and domestic investors," analyst Hank Chen of National Investment Trust told Agence France-Presse. "Acer's payment is higher than expected."
Acer closed down its daily limit of 7.0 percent, or NT$4.40 at NT$59.20, on volume of 34.72 million shares, in sharp contrast to the electronics sub-index which was up 0.43 percent at 370.98 points.
The weighted index closed up 9.24 points or 0.11 percent at 8,727.55 on turnover of NT$111.43 billion (US$3.38 billion).
Acer hopes the Gateway merger, which needs shareholder approval, would boost revenues to US$15 billion and shipments to in excess of 20 million PC units per year, compared with 14 million shipments made in 2006.
However, Chen said this would be difficult to achieve over the short term as Gateway's operations were shrinking and there were big differences in corporate cultures which could prove difficult to overcome.
"Acer may benefit from the deal, but there could be a long way to go before it can reach its target," he said.
Stanley Hsu, manager at First Taisec Securities, said investors were concerned about the offer price and the profit fundamentals of an industry which is undergoing a major shake-up.
"While the acquisition will increase its revenue, investors have yet to assess the scale of contribution from (Gateway)," he said. Gateway is the fourth largest PC company in the U.S.
Acer's agreed takeover of Gateway was expected to regain the company's number three position in global market share over China's Lenovo, a position it initially held after the first quarter to March.
However, second quarter sales figures showed Lenovo had taken back the spot, behind Dell, ranked second, and Hewlett-Packard (HP) at number one.
At the second quarter to June, Acer said it held a 7.1 percent share of the global PC market. This was expected to rise to 8.8 percent once the takeover of Gateway is completed by December 30.
But Hsu said fierce competition had also cast a shadow over the computer industry's profit margins, forcing a consolidation.
"Their prospective union is unlikely to have the price power in the industry immediately as its (combined) market share still stands behind leading Hewlett-Packard and Dell," Hsu said.
Simon Yang, a manager of private industry think-tank Topology Research Institute, was more optimistic and hailed the takeover describing it as a smart move to keep it one step ahead of Lenovo.
This was particularly the case given Acer's move came after Lenovo said it was in discussions to buy Packard Bell, one of the biggest players in the European computer industry.
"Acer won in the race against Lenovo in winning the bride," Yang said, referring to Packard Bell.
Earlier China state media reported the bid by Lenovo to buy Packard Bell will probably fail due to the acquisition by Acer of Gateway, while the company said it was considering all options.
Gateway would exercise its right of first refusal to buy Paris-based PB Holding Co, the parent company of Packard Bell, said the reports.
That will prevent John Hui, a major shareholder of Gateway who bought Packard Bell from Japan's NEC last year, from selling Packard Bell to Lenovo, the Shanghai Securities News said.
"We remain interested in Packard Bell and we are reviewing our options," Lenovo's spokesman Jay Chen told AFP.
Shares of Lenovo Group also fell sharply in Hong Kong following the Acer-Gateway deal. Lenovo closed down 6.7 percent at 5.13 Hong Kong dollars, after slipping nearly 12 percent in early trade.