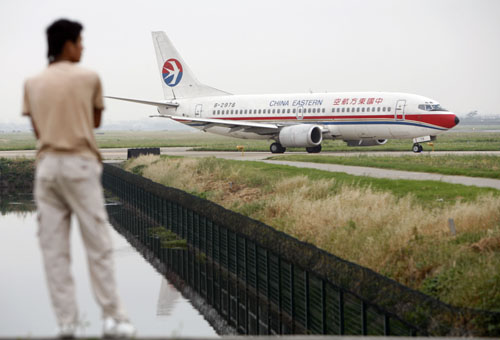 China Eastern Airlines announced Tuesday it had finally won approval to sell a stake to Singapore Airlines, in a deal that analysts said could be of huge benefit to both carriers in the long-term.
China Eastern spokesman Luo Zhuping said all Chinese authorities had given the green light on the long-awaited tie-up, and that a press conference would be held at Shanghai's Hongqiao airport on Sunday.
Luo would not provide any financial details ahead of Sunday but China's state-run press has reported that China Eastern intended to sell a 24-percent stake to SIA and Singapore's state-linked investment company Temasek Holdings.
The Caijing magazine reported in June that SIA would buy 1.24 billion new Hong Kong listed H-shares, or a 15.8 percent stake of China Eastern, for HK$4.7 billion (US$610 million). Temasek, which owns a majority of SIA, would pay about HK$640 million for 8.2 percent, the report said.
China Eastern will become the second of the major domestic carriers to bring in a foreign investor, following Beijing-based Air China's alliance with Hong Kong's Cathay Pacific Airways last year.
Analysts said the deal would provide a much-needed lifeline to loss-making China Eastern and give the Singaporean carrier a key foothold in China, home to one of the world's biggest and fastest growing aviation markets.
"It is a long-term investment (for SIA) but the rewards are potentially very great," said Peter Harbison, an analyst with the center for Asia Pacific Aviation, a Sydney-based consulting firm.
Harbison said SIA and Temasek were likely to have one or two seats on the board, meaning they would not have a major role in decision making.
"(But) because the Chinese market is so big and so important to Singapore, they feel it's a chance they must take," he said.
"The real global growth is going to be within Asia and the better Singapore Airlines is equipped to compete in that market, then the better it's future."
With the rapid expansion of the Chinese aviation market and the prospects for more deregulation of what is still a tightly controlled industry, Harbison said SIA could turn a profit from the deal in two to four years.
Shukor Yusof, an aviation analyst with Standard and Poor's Equity Research in Singapore, agreed SIA was making a wise decision in partnering with China Eastern.
"Singapore obviously covets a foothold into the fastest-growing aviation market in the world," Yusof said, adding it was also a strategic investment in terms of competing with Cathay Pacific in China.
Martin Wang, a Hong Kong-based analyst with Guotai Junan Securities, said China Eastern would in turn benefit from partnering with SIA, one of the world's most respected and well-run airlines.
"The management of China Eastern is really poor. There is a lot integration work to do," he said.
"But in the eyes of a strategic investor, Eastern Airlines has the potential to earn money and it is not far off from having a profitable business model."
China Eastern is due to report its 2007 first half results on Thursday. It forecast last month that it would post a profit in the first six months of the year.