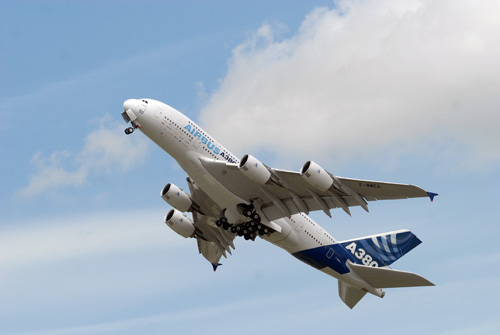 Bidders offered thousands of U.S. dollars yesterday for seats on the first commercial flight of the super jumbo Airbus A380 as an online auction for seats began in earnest.
The eBay online marketplace began taking bids Monday night for the flight between Singapore and Sydney. Bidding picked up yesterday, with offers on various seat combinations.
According to eBay's Singapore website, the highest bid for a single seat was US$8,159 for a place in business class. Another bidder offered US$5,000 for one economy seat - without a window.
The airline is set to be the first to fly the double-decker A380, the world's biggest passenger plane, on October 25 with a flight to Sydney. The aircraft will return to Singapore the following day.
SIA said earlier that a majority of seats on both legs of the first flight will be auctioned on eBay progressively over two weeks.
Starting bids for economy class seats were US$3.80, while business class seats started at US$38 and the premium Singapore Airlines Suites class began at US$380.
Bids on packages in the premium classes, or bids of more than US$1,000 in economy class, required pre-qualification to ensure that the offers were not artificially inflated, the airline said.
Proceeds are to be divided equally between a Singapore charity, two childrens' hospitals in Sydney and the international relief agency Medecins Sans Frontieres.
SIA has committed to buy 19 A380s despite a series of delays that pushed back delivery from early last year.